Other than a few minor problems with rude management at the Flood Zone, the Richmond show was one of the best we've ever been to. 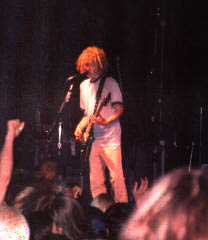 We drove all the way from Philadelphia to go to the show. It took us about five hours to drive. Although we got there about two hours early, the line already stretched well around the venue.

We parked Dee's car (note that it is a good idea to PAY when you park in a parking lot -- more about this later) and went to stand in line... for the next THREE hours. The doors were opening much later than originally scheduled and they were selling tickets at the door, which took a helluva long time as well.

We made it into the Flood Zone as the opening band, To The Moon Alice, was beginning their third song. They were awesome and we really enjoyed them. They did a great job setting the mood for the audience, who eagerly awaited the never-before-seen-in-Virginia silverchair!

silverchair opened with the traditional Slave, much to the delight of the crowd, which despite warnings not to mosh, did just that. Slave was followed up with Leave Me Out. Next, Daniel greeted the crowd with a "Thank you!" and then said, "St. Loooouis! St. Louis ROCKS! Yeah... you guys in St. Louis ROCK!" When the crowd began to jeer him, he responded with a chorus of "What? What? What's the matter?" As the crowd shouted back "RICHMOND!" Daniel let out a laugh and replied "Yeah... YEAH! RICHMOND! YEAH!" Immediately the band began the opening chords of Abuse Me. I was still getting used to Daniel's dreadlocks, which I love, but Dee doesn't particularly like at all.

"Thanks, Richmond!" Daniel exclaimed after The Closing and Pure Massacre. Chris and Ben left the stage, and Daniel informed us that "I'm going to do this song by myself because I think we just broke up." The song, of course, was Cemetery.

Pop Song For Us Rejects was next, which Daniel dedicated to someone (although I couldn't understand the name), then the band went directly into Suicidal Dream, followed by Tomorrow (it was during Tomorrow that Dee and I had our run in with Flood Zone management -- they took our camera away, but we got a roll of pictures anyway!) 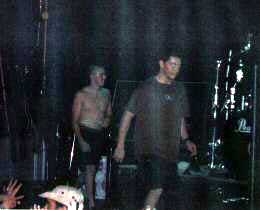 Faultline followed, which I have always enjoyed live. No Association was next, and then Freak, which the crowd helped sing.

"This is off a movie soundtrack," Daniel announced next, and we immediately became overwhelmed with excitement because we KNEW what was coming up. Sure enough, the first incredible chords of Spawn flew out into the club, and believe me when I say that it was unbelivable! The highlight of the song is Chris -- he tackles the monstrous bass line and forces the song to take on a life of its own.

The band left the stage at this point, but returned about five minutes later. Israel's Son was next and last. It kicked its usual amount of ass. Close to the end, Daniel surprised the HELL out of us by removing the mic from its stand, and, teetering on the edge of the stage, offered his hands out to the audience, who grabbed at them ferociously. Once he had moved back to the center of the stage, he ended the song by placing the entire end of the microphone in his mouth, standing in his now famous Christ-like pose, arms outstretched.

We got to hang out with the opening band after the show, a group of incredibly nice guys. We'll be doing a spotlight on them in the upcoming issue of the sideshow fanzine. More photos from the Richmond show will also appear in that issue, as well as a more in-depth look at the show (including an entire transcript of the show, which included too much Daniel chatter to include in this review). E-mail Angel@silverchair.net for details.

(P.S.: Dee's car was towed while we were in the club. Let me remind you once again -- PAY when you park, or you may have to shell out $95 to get your car back!)

We arrived at the Flood Zone in Richmond at a little before 5 PM. Already there was a line of fans wrapped around the corner. The show was being sponsored by the Buzz 106.5, and tickets were only available at the door. The Buzz van was outside blasting silverchair as we walked up. Doors were supposed to open at 7, but silverchair arrived late to Richmond, and their soundcheck was still going on at 7. We heard them play Slave. Doors finally opened at 10 of 8, and we found a good spot up front. Actually, the opening band, "To The Moon Alice" were still doing their soundcheck when we entered.

The DJ from the Buzz, (I don't know his name, I'm not from Richmond) came out and announced that there would be no moshing allowed. Everyone was pretty disappointed about that! To the Moon Alice went on at 8:20 . They were pretty good; the singer reminded me of Gwen Stefani from No Doubt. They played for about 40 minutes.

Finally, at 9:20 the lights dimmed and silverchair came out!!!! Daniel was wearing beige pants and a light blue tee shirt. His dreadlocks kick ass!!!! Ben looked awesome with a mohawk! He wore shorts and no shirt. Chris wore a brown tee shirt and black shorts. They went right into Slave. Daniel used 3 guitars during the show, his cool green PRS, his black PRS with the awesome sticker, PEOPLE SUCK!!, and the orangy red PRS.

After Slave, they went right into Leave Me Out. Then Daniel said to the crowd, "St. Louis rocks!!!" (Remember we were in Richmond!!!!) The audience got upset , Daniel said, "What?? What?? What's wrong???" The crowd reminded him where he was . Then he finally said "Richmond Rocks!" After that they played Abuse me, but Daniel didn't have his silver PRS. I guess it is really broken!

Before playing Cemetery, Daniel threw a pick out into the crowd and said, "Here's a pick." He then announced, "I'll be all by myself now," and then Chris and Ben left the stage. After Cemetery, Daniel dedicated the song Pop Song For Us Rejects to someone, but I couldn't understand his accent, sorry.

During Tomorrow, Daniel said his usual, "The water in Richmond is very hard to drink." After Tomorrow, Daniel began screaming "FUCK, FUCK, FUCK, which he then decided to turn into a song that went like," It's so fucking hot (3 times) Then Yeah, yeah, yeah. He got the crowd to sing along with him. The crowd was soooo awesome!! They were singing along to every song, and really going wild!!

They ended with an awesome version of Spawn! It sounded so great live. After that they left the stage, but we weren't too worried, cause we knew they'd come back. While we were waiting in the dark, the crowd began to sing the song that Daniel had made up earlier, "It's so fucking hot...." Daniel seemed pretty pleased about this when he returned to the stage, he began whispering the words with the audience. The encore song was Israel's Son. Daniel screamed a lot for everyone to put their mother fucking hands in the air. Towards the end of the song, he took off his guitar and went to the middle of the stage. He was screaming like crazy, and touching lots of the people in the front row's hands. He looked as if he was gonna swallow his microphone. After Ben and Chris left, Daniel lit up a pack of matches and threw them. Then he left.

silverchair played a little over an hour. They rocked beyond belief! It was my sixth time seeing them, and they just keep getting better every time I see them. This is definitely a band you shouldn't miss live!!!