By HELEN and VAL

We got to the Oregon State Fair at about 4:30 p.m. and went on a couple of rides and walked around for about 45 minutes. Then we stood around the gates until they opened. After they let us in, we found our seats. There was NO mosh pit at this show! After about half an hour, the Marigolds came out. They were good -- kinda sounded like Weezer. I liked their song about Captain Crunch! 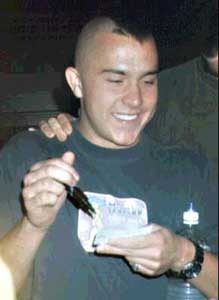 A half-hour after the Marigolds' set, the imfamous circus music came on. silverchair came out and played Slave, the most kick-ass opener in the world! The big surprise was the hair -- I was expecting bald Ben and bobbed Daniel, but it was mohawk Ben and Daniel! As for Chris, he hadn't changed much at all.

During Slave Dan did his little Jesus Christ pose. We don't remember the order of the songs, but we do remember the songs: Slave, Pure Massacre, Freak, Abuse Me, No Association, Cemetery, Pop Song For Us Rejects, Learn To Hate (before they played it Dan said that they hadn't played it in 12 months!), Israel's Son, Tomorrow, Suicidal Dream and Leave Me Out.

Dan was in a talkative mood. He made up a little song about Salem and told us about how when they met Marilyn Manson they said Salem rocked. There were a couple of dudes who brought an Australian flag and were holding it upside down and backwards. Daniel enlightened them on this fact in a sing-song voice.

He did his usual thing in Tomorrow, telling us our water was hard to drink, and then he said, "Sing along 'cause I forgot these fucking words."

Unfortunately, they didn't play any cover songs or B-sides. I would have loved to hear Stoned, which I think is one of their best.

When they left before the encore, people started to chant, "We want more." After five or six minutes they came out and played a 10-minue version of Israel's Son, during which everyone was standing on the benches, despite all the annoyance from the guards.

We arrived at the fairgrounds at about 3. We walked in through the employee parking lot, and we noticed a bus that had just pulled up. We noticed an old guy in the back window laughing at us, but didn't think much of it. We went to the covered barn area and checked out some of the neat animals -- though the smell was overwhelming.

We were supposed to meet some people at the front of the amphitheatre at 4, and it was about a quarter till, so we decided to find it. We met up with the people and bummed around for a bit, since the doors didn't open until 6. Since it was an outdoor venue, we heard the soundcheck going on. They played Spawn.

We were let in about 6:20. I got to sit all by myself since I purchased my tickets at a different time as my pals. But since there was no general admission (therefore, no moshing) I had one of the best seats in the house, front and center.

Marigold, a local band which opened, was pretty good -- a neat little pop rock band. They played a short set and then it took a while for silverchair's equipment to get set up. They finally came on at about 8, with Daniel in dreads and Ben with a little mohawk. They opened with Slave, but without the trademark dramatic pauses.

Daniel didn't make any comments until before they played Pop Song For Us Rejects.

"This song is dedicated to Kellogg's -- snap, crackle, POP SONG."

Before Learn To Hate, he said, "We are going to play a song that we haven't played in a while due to the decibel levels or something. I don't know how long it's been, but I think Ben does." He turned to Ben, who shrugged his shoulders. "Ben says it's been 12 months, and Ben would know because Ben is Ben. And we're probably gonna fuck it up."

He made up some sort of song about Salem: "Salem... caress my BELLY." And he made up a song about how the people holding the Australian flag had it upside down and about how the symbol goes in the top left not the bottom right.

It was a good show, except for the having-to-be-in-seats part. Afterwards, there was a giant mob waiting outside the fence protecting the bus -- which was the bus that drove past us earlier. We found out that the guy laughing at us was Chris's dad.

About half the mob left after two dummy cars drove away and they thought it was silverchair. We chatted with Bailey, Wardy and Hugh. Wardy took something onto the bus to get it signed for me, and I didn't even ask him to. Ben came out to give it to me personally, but then he got mobbed by the 15 people still left. I had a camera with me and Hugh took it upon himself to take the very last picture on my roll of film of me and my three friends with Bailey and Wardy.

By then it was midnight. Security kicked us out of the fair and silverchair were off to Vancouver, B.C.