[Photo of silverchair live in Dallas by Chris Pondt]

We got to the Bomb Factory at about 6:15 or so and waited in line for about 45 minutes to an hour before the doors were finally opened. My friend Travis is also a huge fan of Local H so he was pretty psyched to see them as well. Automatic finally came on at around 8:15 or so and played their set. Their lead guitarist is amazing. I mainly kept my eyes on him, he was playing what looked like a Mustang or a Jaguar, it was pretty sweet. They thanked us and said Local H would be on shortly. We milled around for a bit and then the lights went out and we moved up to the within about 25ft of the stage. Local H played a really loud and tight set. The crowd was starting to get worked up and everyone was jumping around pretty good. They played for about 45 minutes and then threw drumsticks into the crowd. A friend of mine who was also there was lucky enough to snag one. (For anyone who's interested, Joe Daniels plays Zildjian 5A sticks). 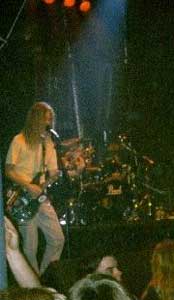 Finally at 10:15, the lights dropped and the circus music began. Everyone started to push forward and when they started the first four chords of "slave" we were pretty close to the stage. It was surreal to actually see the three up there on stage playing. They played "slave", then went into "roses" and then "findaway". During "findaway" I just had to see how close I could get so I started pushing my way up. By the end of "findaway" I was only about 2 or 3 rows of people back and Daniel was right in front of me. Before they started "abuse me" he said "Dallas Rocks!". And of course, we all yelled.

Next, Daniel started Pure Massacre. It was great. During the part, "people cryin, for freedom," Daniel held his hands up next to his head like he was mad and then when the guitar came back in, and everyone just went crazy! Then, Ben and Chris hopped up and I knew "cemetary" was next. It sounded really good, as everyone was relaxing I managed to squeeze myself into the front row right up against the cage-barrier thing. Then Ben and Chris came back on and the song I was most looking forward to, "suicidal dream", began. I just stood there in awe. At the end when it gets real heavy, Daniel was jumping all over the place, I wanted so bad to jump around but I was crammed against the rail. Then, "tomorrow" started and I decided to go back a few rows and get some room to jump around.

After "tomorrow", they played "the door" and half way through Daniel's amp overheated or something and Ben and Chris just jammed while Daniel yelled and said "let the door swing" over and over. Then Daniel stopped and said, "That's what happens to a song when the guitar fucks up half way through." He said they'd have to take a break to fix the amp and if we needed to get a drink, or piss or have sex, then go ahead and do that now. He kept apologizing and said, "This is pretty unprofessional." Then someone in the crowd yelled something back (I don't know what) and Daniel goes, "Yeah, thats why we're millionaires you fucking idiot." Next, they played "faultline" the ending was great, they just played the really fast riff over and over for what seemed like minutes. Next, came "no association" which he introduced as Track #5. Then "freak" which seemed slower than usual. Then, my favorite song of the night, "madman". After that, they went off and everyone hung around for what I figured would be, "lie to me" and "isreal's son".

They came back on and Ben got on the mic, "Do any chicks want to have sex?" everyone laughed... "no I'm not joking," everyone laughs again. What came next was a great surpise, Scott from Local H, strapped on Daniel's silver PRS and they broke into "paranoid". It was really cool seeing Daniel just singing. He was jumping around and at one point, he hopped up on the drum riser and jumped on Scott's shoulders. Scott just kept playing and running around and Daniel just kept singing. It was amazing. Scott left and Chris started "isreal's son". I was excited because I love the song, but sad because I knew it would be the last song of the night.

When the song was over, Daniel jumped on top of his amp and just rolled around on it then left. It was the most fun I have ever had in my entire life. They really put on an awesome show despite the technical difficulties. The only thing that could have possibly made it better is if they had worked "nobody came" into the set, which I wasn't expecting to happen anyway. If silverchair ever come within a days drive of anyone reading this, do not hesitate to load up and hit the road, I guarantee you will not be dissappointed.