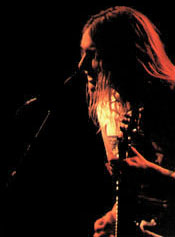 The third appearance of silverchair in Paris in less than two years took place in one of my favorite Parisian concert halls, le Bataclan, which has great decor and acoustics. Many friends and I begain waiting for the show at 1:30 p.m. We know each other thanks to the French fan club, and we met very fine people, some of whom came from as far away as Switzerland, because it was silverchair's only concert in France on that tour. We had a good time and the wait did not seem long.

A competition had been organized in a French rock magazine for bands to send their demos to become the opening band at the Parisian show and to record a song for an upcoming silverchair single in France. Many tapes were received; five were pre-selected and sent to silverchair, who themselves which chose the winner. A band called Manifold were selected. They come from the center of France, they're approximately 18 and played a sort of hardcore that really kicked the pit's ass! They played for 20 minutes, which was too short.

During the second guest band's set, I recognized Ben in the mosh pit. I talked to him for a few seconds, but soon a lot fans came and Ben escaped!

At last, circus music begins at 9:45 p.m. The music is the same as used by a Parisian radio comic show, and many people sang the words! silverchair came on stage and everybody screamed. Daniel wore his 'Freaks' T-shirt, Ben had no T-shirt and Chris wore a blue T-shirt. They first broke into Slave, playing the intro by pausing after each chord, which made the spectators become crazy! The interlude was great, an excellent heavy riff!

They played Roses (I don't like this song, maybe the worst 'chair song ever, but it was quite well-played) and Leave Me Out. They stopped playing and Daniel talked to the audience for the first time: "Hey Paris! You guys are fuckin' rocking!" Someone gave Daniel a picture of him, and he thanked them.

To the audience, he said, "We're gonna play a song which is the first single in America. It's not actually released here yet, but it's on our new album." As Bailey Holloway, the technical crew chief, joined them on stage, Daniel said, "This guy used to play in a band called Black Sabbath. You may have heard of him. His name's Tony Iommi." He removed his green PRS for a black Les Paul Custom I had never seen before to play Abuse Me. Holloway left the stage, Daniel made some feedback and they began Freak (he sang "As cool as fucking you!" while pointing at the audience). At the end, Daniel held the last note and sang "Freeeaaaakkkkk!"

He took his red PRS (in standard tuning) and said, "Merci! Yeah, France! France, France, France, all the girls take off their pants. It's a song of the next album. It's called 'France, France, France, where the girls take off their pants.'" Ben and Chris left the stage, and Daniel said, "This is off our new album. I'm gonna do it by myself. Now it's Tomorrow." But he started Cemetery! There were as many males as females in the audience, but that didn't prevent girls from yelling "Daniiiiiiel!" What a shame! People were so loud that it was hard to hear Daniel. Ben and Chris came back, Daniel asked, "Ready to rock? Next song." They played Suicidal Dream, then Paranoid (I got crazy) and Tomorrow in a row. Daniel said, "Stop saying 'Daniel'! If you keep on, I'll kick your asses! That's a joke, that's a joke, Paris! Just kidding!" He took his green PRS tuned in dropped-D, and said, "This is off our new album. Keep jumping, keep rocking, do fuck up on this! Ready?" They played an awesome version of The Door followed by Faultline. 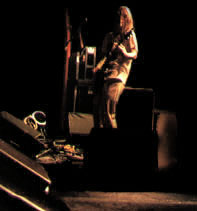 "You guys are rocking! Paris KICKS ASS!" Daniel exclaimed. "We were in Germany last night, and I said 'who is better than Paris?' Someone, I dunno who, he said 'Germany is better than France.'" Fans began to whistle and scream. "Hey, I said 'do you say Germany is better than France?'" Fans then made a loud noise. "Shhh, shhh! Then I said FUCK YOU! FRANCE KICKS ASS!" Next came Pure Massacre. Daniel tried to speak French, he said something like "un du twa cat sanq - see se wi nef di" (that's exactly what he will write for the editor of the French fan club magazine) instead of "Un Deux Trois Quatre Cinq - Six Sept Huit Neuf Dix." He adds "My French is great! This is track number un du twa cat sanq!" Of course, it was No Association, one of my fave songs; there are effects like delay and stuff on Ben's drums which sound great! And next was Madman with an incredible end. They left the stage for approximately five minutes.

We called for them and they came back quickly. "Je t'aime Paris!" Daniel said before making feedback for the intro of Lie To Me (my friends and I were dancing like in the Pulp Fiction-inspired Out Takes and Miss Takes, Ben saw us and pointed his drumstick at us). "Merci beaucoup! Bonjour, je m'appelle Daniel! Thanks a lot! You're great in France!" and as usual Chris began the 'chair anthem, Israel's Son. At the end, Daniel threw his green PRS in the drums. 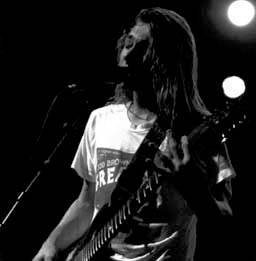 Sixteen awesome songs and 1 hour and a quarter -- that is too short for us fans. We'd had the chance to know Freak Show for a month, so that everyone knew the lyrics of each song, and not only those of Tomorrow or Cemetary. It was a great, excellent atmosphere! They really seemed to enjoy Paris and France! Daniel was moving around a lot, he lost his guitar strap twice as he rocked!

I would have liked them to play Findaway, Pop Song, Learn To Hate, Nobody Came and some B-sides.

Four of my friends and I managed to go backstage after the show. We talked to Ben for about 10 minutes. He was great although it was sometimes quite hard to understand each other. He told us it was one of their best concerts of the tour.

To conclude, it was one of the best concerts I've ever seen!