Story and photos by DAVID MORRIS 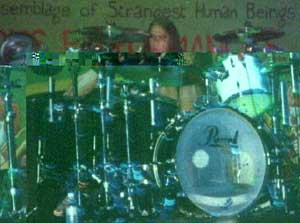 Having been to see silverchair in Auckland previously in 1995, I was expecting the same type of setup and atmosphere, but as the night flowed on, more and more things surprised me.

We arrived at The Powerstation in Auckland at about 7:30 p.m., and I was surprised to see how small the venue was (silverchair last played Auckland at the larger Logan Campbell Centre). The Powerstation has two floors, with a mosh pit on the ground floor, and an upstairs with a bar and tables for just "watching" the show.

I guess the first disappointment of the night was finding out that Spiderbait was no longer playing as opening band. We were never told a reason as to why they couldn't play, and i found it weird, as they are also scheduled to play with silverchair at The Burning in the Light Festival in Christchurch. 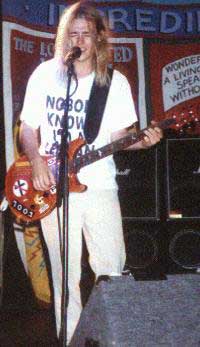 The crowd size and mixture of people in the crowd were also a lot different from the '95 concert. There were a lot more males, and generally older than the '95 crowd, when only about 10 percent of the crowd was male. This time, about half were male.

There seemed to be about 500 people in attendance, compared with 4,000 at the larger Campbell Centre in '95. It was interesting that I didn't see this concert advertised in papers, radio or TV.

Then came the next surprise of the evening, we walked up to the downstairs bar, and found water to be $1 a glass, So I guess if you got hot in the mosh pit, you'd have to fork out the money for a drink of water. This was weird as usually at concerts they give water out for free, mainly I think to stop people fainting and stuff from the heat! In the end, though, it didn't matter as we found ourselves a woman working on the bar who gave us a few free refills over the night!

The opening band was a local band called Eye TV. We decided to go and have a look upstairs, and have a drink. We found a table and chairs and just bought one beer each ($5.50 a can is pretty expensive!)

From upstairs we had a good view of the stage. It was set up with the Freak Show theme, with large backdrops with writing and pictures of all the freaks. "Circus - The World's Greatest Show - Side Show of Living Curiosities," said one banner. Others were "Incredible Wonder of the World - Living, Breathing, Speaking Head without a Body" and "Eccentricities - Snake Wrestler and the 1,000 Volted Woman." 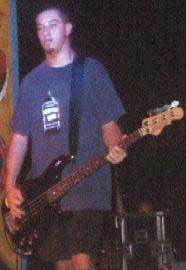 After our drinks we decided to go back downstairs as Eye TV were about to finish, and had a look at the T-shirts for sale. There were two kinds, the new orange Freak shirt with the picture of "Snaz" on it, and also a green hand-dryer one. There were also caps for sale. Prices were $30 for T-shirts and $20 for caps.

silverchair were due to start playing at 10:30 p.m., but since the format was changed a bit, the circus music started playing at about 10:10 p.m., indicating the start of the show.

The guys came out, and a lot of girls screamed. Daniel was wearing the famous "Nobody knows I am a Lesbian" T-shirt with long pants, Chris was wearing a T-shirt and shorts, and Ben was just wearing massive baggy shorts.

Then Daniel faced Ben, and they broke into Slave. I think few people knew the song, as the reaction from the crowd wasn't as strong as when Madman opened the '95 show.

Next was Leave Me Out, and that got the crowd going a little better. I think more people were needed in the mosh pit, as 300-400 isn't enough for a good mosh.

The next song was Freak and everybody really got into that song for they knew it from the radio and having been already released as a single.

Findaway was next, and that seemed to go well, except I was stuck next to a guy with dreadlocks, and all I can remember is having to avoid them for this song!

After Findaway, Daniel started talking to the crowd. Since he is Australian, the New Zealand crowd just had to tease his accent. One guy from the crowd asked him if he wanted any "fiesh and chieps" in a pathetic Aussie accent. Daniel replied in a even worse New Zealand accent, "No, I don't want any fush en chups!" (Fish and chips are a common takeaway food in New Zealand and Australia.)

Throughout the night Daniel hassled the crowd a lot, and also got hassled a lot back, but it was all in fun. For example, he was moaning that the crowd was too quiet, and that the screams were too high pitched, and in reply to that, some of the crowd got a chant of "Smile, smile" going. Daniel's reply was a small cheesy smile.

Abuse Me and Cemetery were the next two songs played. I felt I was the only person in the crowd who knew the songs, as not many people were singing the words, or even moving.

Suicidal Dream and Tomorrow got the crowd singing and moving again. Then came The Door which was really wicked, I thought, and was a good lead-up to my favourite song from frogstomp, Faultline.

No Association rocked and the crowd really got into it, but I was surprised at how Pure Massacre got the crowd going. Most people went crazy.

The last three songs of the night were all quite good ones for the crowd. They were Madman, during which Daniel and Chris ran around everywhere, and Paranoid, a Black Sabbath cover.

Of course, Israel's Son was last, but everyone really got into it, and after it finished, everyone was ready for more, but Ben lead the guys off stage by turning off all the amps, and Chris followed. Daniel placed his guitar in front of an amp, then left. The gig was over just before midnight.

This is Loa writing from Lil' ol' New Zealand. I went to the January 30th concert at the Powerstation in Auckland. silverchair hadn't been down since '95 and I personally I was looking forward to seeing them play. Spiderbait were supposed to open as well as a N.Z band Eye TV, however due to passport problems Spiderbait cancelled. {but played a later free gig to make up for it.}

silverchair came out early due to the fact Spiderbait wasn't there and was met with an enthusiastic response. The Powerstation holds 1500 people, at most but school having started just that day the teenage population was very thin. Freak Show was a few days off release so I only knew half the songs but that was made up for by the brilliant performance by silverchair.

They started out with mostly Freak Show songs {I know Coz' I stole the stage list later on} but mixing a lot of frogstomp in as well. The best songs in the set had to be Cemetery, {Chris & Ben not present but could be seen from the sideline.} Suicidal dream, and the song everyone knew, Tomorrow.

The three songs were the best there and the best performed that night. The encore, Israel's son and Paranoid bought down the house and ended a very early concert. I ended up meeting the band {they are all wonderful guys} and having a great night.