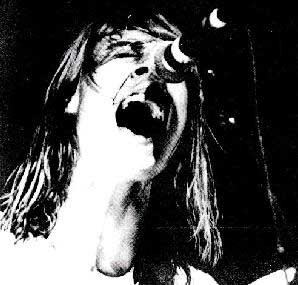 "A little under a minute into it, Daniel blew an amp and the group walked off stage as the crew on site tried to fix the problem," reported innocent criminals page correspondent Norm Oblepias from Australia. "Everyone was wondering what happened because they just stopped and walked off. The radio station was really worried and the crowd (including some Aussie celebrities) were glad when they finally came back on."

Among those in attendance, according to Billboard magazine's Australia correspondent Christie Eliezer, were members of You Am I, Screaming Jets, Hoodoo Gurus, Tumbleweed, Marcia Hines, Skunkhour, INXS's Kirk Pengilly and Def FX.

"Even the local celebrities who are not even in the alternative scene were captivated by some of the messages behind silverchair's new songs," Oblepias said. The crowd of 500 or so was made up mainly of music business insiders.

Foxtel is Australia's largest cable TV provider. It is equally owned by Telstra, Australia's national telephone company, and Rupert Murdoch's News Corporation. Red actually started operations a year ago, but the channel was recently revamped. A competitive service, ARC-TV, is about to be launched by a company called Optus.

"Obviously Red has learned that with ARC researching its audiences to give them exactly what they want, going on personal tastes of its staff is no longer good enough to get a mass audience," Eliezer said. A large marketing campaign will begin soon to lift the channel's profile with the public and get the edge over ARC, according to Eliezer.

As anyone under the age of 25 will tell you, Australia's newest rock sensation silverchair are hot.

It was a lesson the folks at Foxtel learned as the Novocastrian trio took the stage for the official launch of the cable music channel Red.

On the Foxtel wharf at Pyrmont -- before an audience of 600 music industry types -- Daniel Johns and Co. blew an amp minutes into their first set.

With a self-conscious shrug and a bottle of water in his hand, Johns led the band offstage while the technical hitch was hastily remedied.

But it wasn't long before the silverchair assault resumed and some of [the] Australian music industry's biggest names were treated to a display of blistering rock -- silverchair style.

Although some preferred to partake of the red daiquiris and chat among themselves while the band played on, singer Max Sharam, the Hoodoo Guru's Dave Faulkner and Marcia Hines paid careful attention to the silverchair message. Also there was Ian "Molly" Meldrum and his hat. Meldrum is the new channel's host and he did a sterling job leading the rest of the channel's "VJs" -- or video jocks.

Molly and crew were looking mighty relieved when silverchair took the stage.