(HOLLYWOOD, Calif., 4-Feb-96) --- Three young, or should I say very young, lads from down under have taken the world by storm with their youthful charm and songwriting that is hip to today's ear and musically mature beyond their years.

silverchair came to L.A. while on their summer vacation from school (I think I'm going to be sick) as the seasons are reversed on the other side of the globe.

A crowd that consisted of many fans that were actually younger than these guys as well as slightly older kids -- and yes, parents were out for this one at the Palladium as well -- enthusiastically cheered on every move. The front row at the barricade was made up of mostly girls who were, in their own sweet, innocent and youthful way, working it to get backstage (quite amusing).

In the meantime, the moshers were out in force. Many had to be pulled over the rail while some even needed medical attention. Not a bad reaction if you're the band, considering that even before you will graduate high school you are a world famous rock star that causes kids your own age to do these silly things (OK... so I did a few silly things in my time... and occasionally still do... but I'd never admit to it in public... oooops, I guess I just did).

I have to admit that I was quite impressed with the band's musicianship. Daniel Johns is a decent rhythm player while Chris Joannou is solid on the bass. The clear standout is drummer Ben Gillies whose Bonhamesque fills and Grohl-like symbol crashes already make him a formidable player with a lot of time for growth. The influences here range from Zep to Nirvana.

The 10 or so song set featured their big singles Tomorrow and Pure Massacre as the overwhelming crowd favorites. The rest was good, but these two songs are definitely a step above the rest.

Despite the fact that the PA cut out midway through the set and again during what was supposed to be the final song of the encore, the frantic energy was never really disrupted. The first time, Johns and Gillies kept it going by breaking into an impromptu drum solo. The second time, the guys decided to go into a hardcore jam of, believe it or not, Surfin' Bird, after the sound came back. Pretty cool stuff.

Other than some fairly sophomoric lyrics, silverchair stands up to many of their older contemporaries. This is a band with a great future ahead and one who will be fun to watch grow before our eyes, if the business continues to give them a chance to do so. 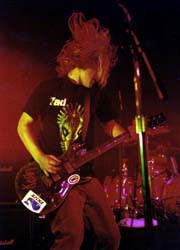 silverchair are back in the U.S., opening for the Red Hot Chili Peppers, which they did last night at Madison Square Garden. But last weekend, before the Peppers tour began, they headlined the L.A. Palladium, and it was quite the momentous occasion.

As they pulled in to sound check, they were greeted by a throng of 150 screaming teenage girls, in a scene right out of [the Beatles'] A Hard Day's Night. Unbeknownst to the girls, the band had just come from the hospital where the drummer, Ben Gillies had been taken complaining of "side pains." He was seen and released, but advised to come back after the show for more tests.

After that things could only get better.

But no, the underage Aussies managed to blow out their sound system not once but twice, once during Madman and again during their last song, Israel's Son.

Things did begin to pick up a little, when someone threw a pair of the itsiest, bitsiest pair of scarlet bikini underwear at Daniel Johns' feet. Their obliging roadie wasted no time in scooping them up, and putting them on; the only problem is he wore them on his head.

Johns barely noticed as he worked his way through the band's 60-minute set, spiced up with some new songs, and a couple of punk covers -- a nice change from their usual grunge redux.

After it was all over, young Gillies returned to the hospital at 2 a.m. where he spent the rest of the night under observation for what was feared to be acute appendicitis, but turned out to be a bad case of indigestion.

Atlanta radio station 99X, a strong supporter of silverchair, has already thrown its support behind Ammonia's single Drugs, but other stand-out tracks on the album include the current Australian single Ken Carter, In A Box and Sleepwalking (previously released as EPs in October 1994 and March 1995, respectively).

Ammonia played their first U.S. show at the Dragonfly in Los Angeles Feb. 8; they teamed up with silverchair at the International Ballroom in Atlanta Feb. 10 and Chicago on Feb. 17.

Let's see: 6 kicks in the head, a kick in the face, one steel toe boot planted square in my lower back, two ringing ears and and one cigarette burn. Man, I'd have to say that the silverchair show last night at the Palladium in Hollywood was the best concert ever!

I feel sorry for the little 10 year old girls that I slammed.

Dime Store Hoods and Smile kicked ass as well. I think I was the only one at the show that actually knew most of Smile's songs.