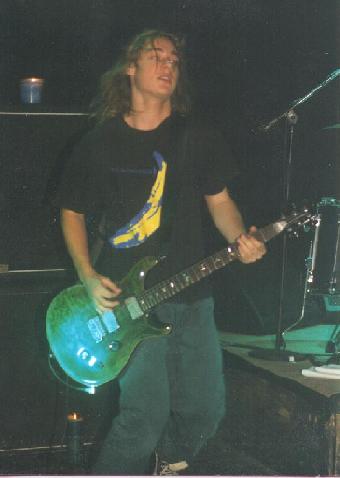 I got to the Bomb Factory about 4 p.m. Basically, the Bomb Factory is a big warehouse built on a slab of concrete with a little make-do stage in the corner. It holds about 3,000 people. The doors didn't open for another four hours, so I had plenty of time to spare. There were about a dozen or so people in line at the door, and I wasn't about to just sit at the door twiddling my thumbs, so I went around back and joined two girls who had been out there since 2 in the afternoon.

I couldn't believe the power that the drums were kicking out. I was outside, with a huge brick wall in between, and yet every time Ben punched the bass, it'd go clean through my chest. Needless to say, I was very impressed and could only imagine
what it was going to be like in there.

The bouncer was a real jerk. I spent the majority of the next three hours 10 feet from the door. He wouldn't let us get any closer than that. Then, out of nowhere, he'd let us come to the door and look in at the warm-up. I think he'd count to 30, either that or wait until one of the girls started to drool, and then he'd tell us to get back. I stopped playing after a while and went back around.

The line moved pretty fast; of course I had cut to the very beginning. The girls I had met happened to have friends first in line (very convenient -- it's always who you know). The bouncers barked for one straight line, though they must have been on drugs or something because that just wasn't gonna happen. We eventually hearded through that little door and spent the next hour and a half claiming our space. I stayed with the girls (hey, they were pretty cool) and we claimed the four square feet in front of Daniel's mic. I do not exaggerate when I say that I fought the rest of the night to keep it, but I did.

Eventually, Smile came on, and like a bunch of Energizer bunnies they just would not get off the stage. When the crowd starts yelling "get off the fuckin' stage" and "you suck" everytime you end a song, I would think they'd get the message, but they continued to play two full sets, about an hour or more. Maybe it really was just 45 minutes, but it sure seemed like forever.

It was so incredibly hot! Everyone was back-to-chest, shoulder to shoulder... the body heat was about to kill us all. People were being pulled out and silverchair hadn't even appeared yet (you may think i'm exaggerating, but i'm not... I still have black lint imbedded in the shirt I wore that came off the guy's black shirt behind me). They threw a bunch of water on us, we passed around cups (I was dying, don't lecture me on hygiene) and we just stood there for a good 30-45 minutes until silverchair decided to get their butts on stage. And then it began....

The lights went out, girls screamed (what else is new?) Someone came out and started putting candles everywhere: on the stage, on the speakers, around the drum set. Man, it was cool. Finally, they started to play a song (I still don't know what it is, but it sure got us going). By the time the trio finally appeared from the shadows, I think we were all about to pee in our pants from excitement. They sure know how to work a crowd.

They opened with Leave Me Out, Findaway and Slave. No stage comments, just rock. After Slave, Daniel finally said "thanks" and tried to introduce the next song, Acid Rain, but he was overwhelmed with feedback and said a naughty word.

After Acid Rain, he thanked Smile for the food fight and said they (silverchair) kicked their (smile) ass. After Suicidal Dream he asked everyone to scoot back 10 centimeters, which is about 4 inches. We were killing the security guards in the front, though they did have a big gate.

I did learn what the next two songs were about:

Before Madman, Daniel asks for a "circle thing" (mosh pit). Some had attempted this before (right behind me), but no one was into it and there really wasn't enough room. We were basically moshing like the rest of the world does: jump up and down and enjoy the show.
No Association, Faultline and Learn To Hate were next. They were unbelievable. Then they started doing a jazz jam that was pretty cool. Nirvana had done it a few times during the '91 tour and called it Formaldehyde. silverchair called it Out Of Tune. Pure Massacre immediately followed, with a huge cry from the crowd.

That was the end of part 1. As they left the stage, I left my spot. I had survived that long, but it was either get a drink of water or be pulled out in a few, so I chose the former. The two guys beside me hadn't made it, not to mention all the girls, so there was no way I was going to press my luck. I think I drank 6 or 7 glasses, too.

So, I watched the encore from the back, around the sound booth. They started with Nobody Came. It was pretty cool to hear another new song. I was thinking, "what the heck is this?" Then came Israel's Son and I knew that the place was about to get smokin'. A quick thanx from Daniel for coming and the big finale was off.

And it rocked! After the regular song, Daniel started doing this weird experimental reverb stuff. It was so incredibly cool. He started rambling. I didn't know what he was saying until he started yelling "FUCK YOU! FUCK YOU!" He continued, "FUCK! STOP! No one likes you, no one fucking likes you... REJECT! Rejects! Something's wrong... piece of shit... piece of fucking... DIE!!!"

Like bats out of hell, they went nuts all over the stage. Daniel was practically killing his guitar, screwing with all the knobs on the amps. Chris was banging that head like a champion, hair flying everywhere. Ben was back there beating the crap out of his set -- amazing the heads survived that last one. It was too intense, the best closer I'd ever seen. They not only went out with a bang, they blew up the cannon.

After they ran off the stage (what was left of it), we were quickly pushed out the front doors. I went to my car and began to notice that I couldn't hear a thing (and didn't for two days). But hearing or no hearing, I drove back that long 4-hour drive with a big ol' smile on my face.

All in all, absolutely the greatest show of my life.