Leave Me Out
Slave

Daniel: "Thanks. The next song is a Sex Pistols song. You're in tune, Chris?"

Daniel: "Chris has got a wave that doesn't work, so we've just changed it. That's why the song sounded pretty baseless -- 'cause it had no bass. Don't worry, Buck'll save the day. Thanks, sorry. The show must go on."

Daniel: "Thanks. Thanks for jumping. Thanks for all coming and putting up with the technical difficulties. Ready?."

Daniel: "The next song's a Bruce Springsteen song. Or someone that's really famous around here."

Daniel: "Thanks for jumping around. This song's about penises."

Daniel: [burps at the end of the song, then Ben plays a few drum notes] "That's a kick drum. The next song's a new song. You probably won't like it, nor will we. Crowd surfing to nothing? Oh, rock on!"

Daniel: "Thanks. No more clothes, please. We've got a flowered shirt, a hat -- that's all we need to get through the hard times. Now's a song... this song's about death."

Daniel: "Just 'cause you're in the tent doesn't mean you don't have to jump around. You can try and get down the front if you like. But you'll have to like, walk over all these people. If you can make it from the very back, you can do a stage dive. Are we gonna play a jazz song? We're gonna play a jazz song but it's really bad so this is your time to go to the toilet." [They play the short jazz song.] "Thanks. That was rockin'! Thanks."

Daniel: "What? There's a rude girl here in a green hat, and she's really weird. [laughs] She thinks green's cool. I think green sucks. Every colour sucks, the only good thing to wear is black. Black for death." 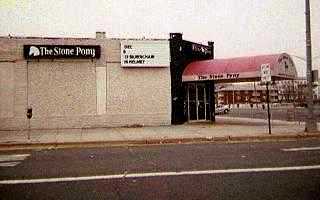 Some of the world's best bands have played The Stone Pony in Asbury Park, New Jersey. You'd never know to look at it that the Pony is such a hallowed place in the history of rock 'n' roll.

The Pony is a great destination in the summer. Only a few feet of street and a path of wooden planks over the sand separate it from the beach and the Atlantic Ocean. But going to the Pony in the wintertime can be a test of endurance. The gentle ocean breezes of summer gives way to wicked winds which whip across the water.

This night, December 13, 1995, followed a day of rain and snow flurries. By 7 p.m., several hundred people had gathered outside, many of them shivering in the cold, having left their coats elsewhere (since carrying a coat at a rock show is usually more trouble than it's worth). Once inside, the crowd provided the human ingredients for a steaming sweat box. On a good night at the Pony -- and this was a very good night -- it's hard to believe that the number of people crammed into the joint is within the limits of the local fire safety ordinance.

So this overheated pack of music lovers, moshers, mini-kids, and moms and dads had come in from the damp chill to see silverchair. If anyone of them was disappointed, it wasn't apparent before, during or after the sold-out show.

Looking for all the world like a teenage garage band (which they truly were not so many months before), silverchair hammered out eight of the 11 songs on their debut album frogstomp, Acid Rain from their Tomorrow EP (something a bit special for the fans, bassist Chris Joannou said in a radio interview earlier in the day), and three heretofore unrecorded songs -- Slave, No Association and Nobody Came.

Daniel Johns was very talkative during the show, as only once did silverchair play two songs in a row without comment from the guitarist/singer. He fully let himself go as Israel's Son concluded, emitting a series of obscenities, hoarse screams and impassioned moans. Joannou was bucking and grinding at stage right, and drummer Ben Gillies' sent his long hair flying throughout the show as he reminded some older fans of Led Zeppelin's John Bonham.

To handle the overflow crowd, a tent had been erected behind the club and those in the tent could see the show through a large opening where a metal door had been rolled up.

"Just 'cause you're in the tent doesn't mean you don't have to jump around," Johns said. "You can try and get down the front if you like. But you'll have to like, walk over all these people."

"Crowd surfing to nothing?" Johns marvelled."Oh, rock on!"

Though one of The Stone Pony's claims to fame is the fact that local rocker Bruce Springsteen has often shown up unannounced to jam with a featured act there, the crowd on this night had little reaction to Johns' introduction of silverchair's massive hit Tomorrow as "a Bruce Springsteen song."

"Or someone that's really famous around here," Johns offered. He may have met with the same reaction if he had mentioned the name of another local rock notable, Jon Bon Jovi.

But there did not appear to be many devotees of the type of music made by Bon Jovi or Springsteen in attendance on this night. (Major Springsteen aficianado John Watson, silverchair's manager, was laid up in New York City with a cold.)

In addition to silverchair's considerable base of young fans, there were a fair few "oldtimers" in the crowd. In talking to some of them after the show, comparisons were made between the young Australians and such bands as Black Sabbath and Led Zeppelin in terms of their hard edge and upfront approach to music. This might have been expected, since the members of silverchair had cited those groups as influences.

During the course of the show, it became apparent that there was something special about silverchair. It wasn't that they showed technically perfect musicianship (although you could match Gillies' chops on drums with anyone working today). It wasn't some flashy stage presence or deeply profound lyrics (though Johns' words to Faultline were so moving in live performance that you could easily shed a tear for the young boy who died in the Newcastle, Australia earthquake when the silverchair members were only nine or 10 years old).

What the show revealed was the absolute excitement and enthusiasm of three people, unaffected by celebrity, who were doing something they liked to do, and doing it well. Though a product of the '90s, silverchair have none of the pissing and moaning that stinks up so many of their contemporaries. silverchair's sound is raw and refined at the same time; it respects the music which made rock 'n' roll real while emerging as fresh as the date on today's calendar.

As the band left the stage that night, they headed out the door and onto their tour bus. The crowd filed out from the hot space inside the Pony into the cold New Jersey air. I walked the seven blocks back to the place where I lived, and got a strange and strong feeling that somehow, this night was going to have an impact on my life. I had no clue that exactly two years later to the very night, I'd be at a silverchair show in Melbourne, Australia, and that Daniel Johns would dedicate Israel's Son to me. If you don't believe it, I don't blame you, because it sounds pretty much impossible.

As soon as the lights went down and silverchair walked on stage, there was a huge racket of screams and a blinding array of flashes from the audience. Apparently there were plenty of teenyboppers armed with their sureshot cameras in the packed crowd -- after all the members of the band are still in their teens themselves. Granted, it was nothing like Beatlemania, but it was indeed a strange experience to watch girls as young as 14 crowdsurfing in order to get closer to their new heartthrobs as the trio started things off with the Sabbath-like Leave Me Out.

But the bottom line is of course the music, and silverchair are good at what they do. They are respectable musicians and play tightly together yet sound like your typical Seattle grunge outfit, and after a while it gets kinda tired. A couple of songs stand out -- the moody and melodic Suicidal Dream and the speed metal instrumental Madman -- but Daniel Johns' vocal delivery is a bit too close for comfort to Pearl Jam's Eddie Vedder, especially on the hit Tomorrow, and and most of the songs become generic as the set wears on. On the bright side, encore Shade [see editor's note below] featured some interesting textures and changes, and silverchair prove to be quite powerful in the live setting, so there's always hope.

Blame it on their youth or the state of the business, but the members of silverchair need to stray away from their heroes (and/or the current musical trend) a bit or run the risk of being has-beens before they reach the legal drinking age.

[EDITOR'S NOTE: The encore songs at this show were Nobody Came (probably the song the writer said was Shade] and Israel's Son.]