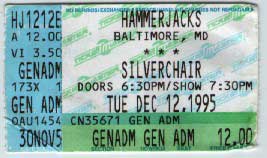 Just before silverchair came on, I looked around and noticed just how packed the place was. Apparently, they had oversold the place, because it looked like some people didn't have any room to breathe.

At 8:50, the stage went black. Next, a really odd music clip came on, with samples of people saying things like "boring fart" in a heavy Australian accent. After about five minutes, the band strolled out on stage, running through Leave Me Out.

Over the course of the night, the band played three new songs, Slave, No Association and Nobody Came, according to the set list laying on stage. They'd better be careful with Slave -- the opening chords sound EXACTLY like Mad Season's I Don't Know Anything.

The band, particularly Daniel Johns, have been very careful to poke fun at themselves on a regular basis. For example, when they played No Association, Johns said, "Here's a new song. You probably won't like it." Johns even bordered on pretention by similar actions such as:

Personally, I was very happy to hear them play Acid Rain. When I saw them in Atlanta in June, I half expected them to play it, but they didn't. This show overall was even better than the Atlanta show. For one thing, the sound was far better. In Atlanta, it was virtually impossible to understand anything that Daniel said. Second, they seemed to be much more comfortable with the American club atmosphere.

Basically, silverchair proved that they're just as good, if not better, than many performers with far more experience. They didn't sound like a band of sixteen-year-olds, rather more like a bunch of seasoned professionals.

The only real disappointment to the show was its length. When they played Atlanta in June, their set lasted an hour, which I assumed was because it was a "free" show. However, this show, which I paid $15.50 to see, also lasted about an hour. This seems to be a trend among some of the currently popular "alternative" bands. Green Day did the same thing. Both bands definitely have enough material to play for longer than an hour.

Well, I got back to school about seven hours after the end of the show, and bombed my physics final seven hours later. Was it worth it? Sure, why not.