Review: silverchair, DV8
By THE END radio station, Seattle
After a lengthy intermission and several false starts the sound equipment was ready. The applause rose to a deafening level as singer/ guitarist Daniel Johns, bassist Chris Joannou and drummer Ben Gillies took to their instruments. Without a word the trio filled the room with the heavy grooves of Madman, an instrumental composition from their debut album, frogstomp.

The crowd was immediately ignited, pushing forward while the pit began to swell. Johns stepped back, took a breath and smiled at his bandmates before laying into Leave Me Out.

From the moment his vocals cut through the wall of sound it became obvious that this 15 year old possessed a talent far beyond his days. His voice was firm, full and smooth -- without the raspy edge usually associated with this type of music.

Similarly, his bandmates held the groove with a glaring energy rarely seen in a bunch of teenagers. Joannou remained focused and concentrated as he banged his head in unison with the guitarist. All the while Gillies rode the skins with precision and ferocity.

silverchair rallied through many of the songs from frogstomp including Shade, Findaway and Faultline. They also unveiled several new tunes that do not appear on the disc. Songs like Nobody Came and Blind captured as much attention as the album cuts. Then, for the slow melodies of Suicidal Dream, the audience sang along, at times nearly overpowering the singer. 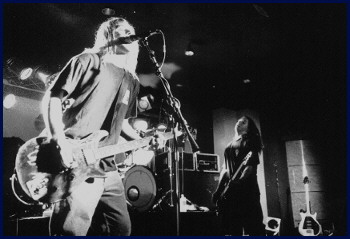 Johns quietly offered thanks before clamping into the single, Tomorrow. Again the pit swirled and the crowd sang. With only one song in between, the band sank into the decaying melodies of Pure Massacre.

silverchair disappeared as the room shook with praise. After a few minutes the band returned for an encore. Joannou took the lead, beginning with a lone bass riff that echoed between the walls of the small club. When the band joined in, it was obvious that the final song was Israel's Son.

Instead of keeping the arrangement found on the album, silverchair played with the pieces -- refitting the parts into an epic journey that lasted a good seven minutes. When the song finally came to its dramatic climax the room gave up one last surge of applause before the band slipped behind the curtain.

Burning with the edges of youth and a heavy guitar sound somewhere between seventies metal and nineties alternative, silverchair commanded a spectacular performance that kept the crowd wound in tight circles till the very last moment.


By JAAN UHELSZKI
Addicted to Noise

Perhaps it is the fact that they are at the primal core, the birthplace of all that is grunge, but if the San Francisco show two days earlier was explosive, the Seattle one is revelatory. Just three years after they first played together, they have become a formidable live unit. At Seattle's DV8, the seminal rock club, singer/guitarist Daniel Johns introduces Findaway in a broad cockney accent, telling the audience, "the next song is a Sex Pistols song." More punk than the others, he almost gets away with it. Except that the song sounds more like the Clash than the Sex Pistols.

John Watson, the band's manager, says Johns is not very adept at stage patter, but he's learning ­­ his sing-song tenor voice straining to be heard. The transformation from teen to rock troubadour is never more apparent than when he's introducing the songs. It's the only time he really slips out of the rock persona ­­ alternately ntroducing their debut single, Tomorrow, as a song about cat's scrotums (Seattle) or about premature births and premature ejaculations (San Francisco). I can't help thinking that they'll have to grow into their lyrics. It's either that, or on-stage they're truly 22-year-olds trapped inside 16-year-old bodies, like a rock version of the movie Big.

Radiant, like brides on their wedding day, a strange power imbues them, and they fire off each song with increasing intensity and fervor. Johns isn't impervious to the crowd's reaction, and he begins to feed off their energy. I'm gratified to see it, because he has told me that he doesn't really get pumped up before a gig, which I interpreted as teenage ennui, but turns out to just be teenage bluster.

To their credit, the band claim they are unmoved at being in the Mothership of Grunge. This is not the Canterbury Tales, and they are not pilgrims making their way to Mecca. Yet it is disconcerting seeing Johns stand on stage looking in the eyes of the beholder, a little too much like their still-missed favorite son, Kurt Cobain, singing the lyrics of Suicidal Dream, with it's "I fantasized about my death/ I'd kill myself from holding my breath/ My suicidal dreams, voices telling me what to do."

The crowd here embraces silverchair like one of their own, and there isn't any indication of a backlash against these teenagers who have stamped their still-forming personality onto the native art form. In Seattle, reports of grunge's death are greatly exaggerated.

After their sweaty, fever-pitched set, Johns thanks the audience ever-so politely for coming, reverting back to his gawky persona before my eyes. It's after midnight, and the coach is turning back into a pumpkin. Unaware of any such transformation, the crowd is reluctant to leave and hang around the stage area before they're swooped out into the night by the security guards.

After the last of the civilians have filed out of the club, the VIPs and hangers-on carefully make their way downstairs to a room that looks like nothing so much as a finished basement in some '50s sit-com. Painted cinder blocks and burnt ochre wall-to-wall carpeting stretch across the cavernous expense of the VIP lounge. The sea of putrid orange is relieved only by the occasional barrel chair and by the two scarred Formica bars that are littered with half-empty paper cups and doused cigarettes. It isn't a glamorous crowd. They seldom are in Seattle, but it is an curious crowd. A little younger than usual perhaps, but that's due to the fact that the headliner's average age is fifteen. No, the denizens of this Northwestern musical oasis are curious to find out if silverchair is just a grunge tribute band, or the real deal. Even former Nirvana bass player Krist Novoselic is here to scrutinize silverchair on this mild September eve, under the shadow of Seattle's Space Needle.

The music biz hoi polloi are not quite sure how to approach these three. silverchair have not yet acquired the necessary social graces to make it easy on them either. Instead they stand awkwardly around the picked-over cold-cuts, uniformly shifting their weight from one foot to the other. Some bear gifts of surf-wax and promotional boxer shorts. Another brings a snowboard. "It is winter in Australia now, isn't it?" the gift-giver inquires.

The music director from the local radio station has the foresight to bring squirt-guns, and this proves to be a much better ice-breaker than the snowboard. Johns and Joannou spend the next hour in mortal combat with him, as well as ambushing their ever-patient manager until he has to change out of one promotional t-shirt into another.

Hardly anyone approaches the band members, and it's as if the partygoers and the band exist in two parallel universes. Tired of the chase, Johns plops himself down on the dirty pile carpeting and sits alone for a time, in silent contemplation of God-knows-what, as the frivolity goes on around him. It's not that he's unfriendly. He just doesn't know what to do. And neither do his admirers. They're more used to the standard issue self-absorbed rock star who is only too happy to accept their compliments. This model confounds them.

After a while Johns gets up and rejoins the squirt-gun battle.

"Good, dude," parries Johns, without missing a beat, not stopping to chat. He is uncomfortable when asked to pose with nubile grunge princesses who drape their thin arms around his shoulder and pout at the camera. As soon as the flash fades, Johns is off again to find his mates.

All photos by Dustin Rabin
Courtesy of SODA Magazine