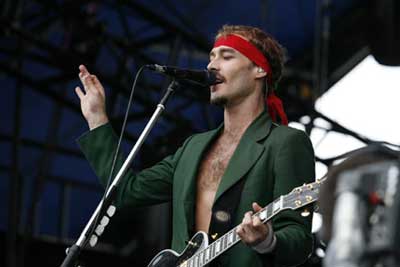 "If you're not in Chicago, you're missing out" -- Silverchair's Daniel Johns

Back at the AT&T stage, a large and receptive audience welcomed Australian mainstays Silverchair. Opening with "Young Modern Station" off their latest album, Young Modern, which dropped in the U.S. just last week, the band looked and sounded happy to be playing, even after all these years. A grateful Daniel Johns often thanked the crowd and insisted they clap or sing. Several of the new songs shined, including "Greatest View" and "Reflections of a Sound."

Though the band looks darker and plays heavier (and deeper) music than their pop prime in the mid- to late-nineties, the vibe is surprisingly happy. But dig deeper into their catalog, particularly 2002's Diorama, to more clearly see the bridge between, say, "Ana's Song" and the latest record.

Midway through the set, keyboardist and birthday boy Paul Mac got a nice surprise when Johns wailed through "Happy Birthday" with his high-pitched and wavering vocals. But that certainly wasn't the only song that the crowd got into; "Ana's Song" and set closer "Freak" inspired the sort of archetypal festival sing-along that we weren't expecting until Pearl Jam's closing set on Sunday.