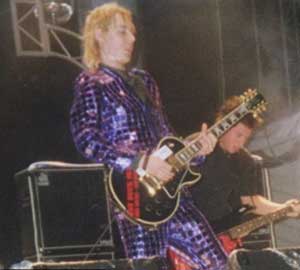 The advertising slogan that Queensland Tourism chose for their ad campaign - "Beautiful one day, Perfect the next" was a little presumptuous. If 'beautiful' and 'perfect' include unpredictable weather, wind and rain then someone should have informed me of that.

I'm sure you're not here to hear about the weather but lets just say it was crap with a capital "C". Bernard from Powderfinger even changed the lyrics to "These Days", singing such lines as 'We're all going to get electrocuted soon' and 'I knew this would happen thats why I wore my rubber shoes' which amused most people in the crowd.

silverchair came onstage a little after 9pm and the first thought that entered my mind when Daniel walked onstage was "oh my god WHAT on earth is he wearing?!?". I'm sure that was a sentiment echoed throughout the entire 15,000 strong crowd. It appeared that his chosen attire for the night was a purple and white flared suit made out of sequins. Think 'Saturday Night Fever' style. Flares. Purple. Sequins. It was definately odd to say the least!! 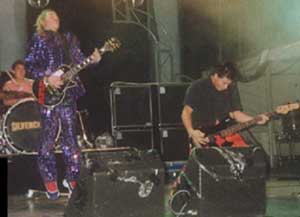 People entering the mosh pit were greeted with an odd set of rules - cameras were allowed in but bottles of water and such were strictly prohibited. Obviously a few people managed to slip past security judging by the amount of projectiles hurled at young Mr Johns' head.

Despite the rain and flying objects, silverchair put on a powerful performance as only they can, powering through Israel's Son, Emotion Sickness, Slave, Pure Massacre, Ana's Song, Miss You Love, Satin Sheets, Madman, The Door, Freak and Anthem For The Year 2000. Notable absences from the set list included Paint Pastel Princess, Kick Out The Jams, No Association, Spawn Again and Tomorrow.

I only wish the weather would have been a little better, and the organizers lack of buses back to Surfers Paradise after the show was not very good either. Other than that, the chair were in fine form and I can't wait for the next 3 shows in far north Queensland, if only to get a better view of Daniel's bizarre suit!!