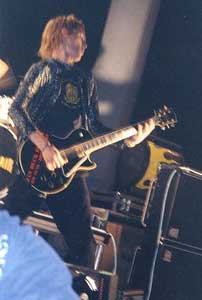 It took about two and a half hours to get the Universal Amphitheatre. I have never seen so much traffic. I was so pissed off because I thought we were going to miss my favorite band in the entire world, silverchair. My friend, Rich, and I got to the parking structure and practically sprinted through Universal City to find the Amphitheatre. Finally we found it, we got to our seats and were amazed at all the "teenyboppers" who were screaming and waving their arms. I think I was the only male over 18 in that place to see silverchair.

They were all dressed as like they have been for the last year of this tour. Daniel was dressed in his usual silver, button-up shirt and black slacks. Ben was shirtless and Chris was sportin' the orange pants.

I was so concentrated on trying to remember every detail, so I'll give you the most important parts that stand out in my mind. The first was "Emotion Sickness." The entire song was AMAZING. I love that song. Daniel has one of the best voices in rock & roll, right next to Scott Weiland of STP.

Another thing I loved was his "saturday night fever" poses. He would pause several times throughout most of the songs to put a finger in the air and show the crowd that he's got moves.

Daniel sarcastically mocked the crowd for thinking they were punk just because they were at a Blink 182 show by saying things like, "You are all so very punk". And then he said something like, "The three of us don't know what its like to be punk because we came from very rich families. Our parents bought us very expensive instruments when we eight years old. They bought us Gibsons and (some other brand) guitars". He then turned away from the crowd, then looked back at us and said, "That was a joke, but I guess you didn't get it". 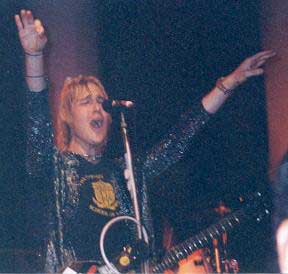 Daniel seemed a lot happier than he was the last time I saw Silverchair at the House of Blues in LA, in April. He didn't talk to himself as much and he interacted with the other members of the band a little more. He still had his moments where he would just lean back and scream out of the direction of his microphone to who ever it is that is lucky enough to hear what he has to say off mic.

For a second I thought that they were going to play "Spawn Again" because Daniel starting reading a bible passage that seemed to be about killing a sheep. He was pissed about this. He said things like "Moses laid the second sheep on the first...and you know what he did...DO YOU FUCKING KNOW WHAT HE DID...HE KILLED IT...HE FUCKING KILLED IT...you see that's what I'm talking about. Maybe LA thinks it's better than the fuckin' rest of the world. Maybe you think your different." But to my disappointment, Spawn did not follow. Oh well, maybe next time.

silverchair is the greatest band ever and one of these days KROQ (LA's most popular alternative station) is going to realize that and start playing them. KROQ's number is 1-800-520-1067...call and request. Thank you for the AWESOME show guys. Keep it up. See you next time!

I have been a silverchair fan for about 3 years, but it wasn't until about a year ago that I really got into them. Due to an extremely lovely set of parents, I had not been able to attend any concerts without adult supervision (it's a long story, but I still love them). So, needless to say, I missed several chances to get to see silverchair in concert. However, once at college, I heard silverchair would be touring the US. One can imagine my excitement. I had waited three years for this!

With virtually no begging, my friend agreed to drive and go with me. So shortly afterwards, I had tickets to the Los Angeles Universal Amphitheatre show. As luck would have it, I had some shitty seats. Luckily, my friend, Melissa, ran into some people she knew and found out where their seats were. Our "visit" to their seats turned out to last the entire night.

When the day came, I was excited. We got the to venue just in time to see Fenix TX. The group seemed pretty good, but I honestly had never heard of them. But then they prepared the show for silverchair. I was so excited. 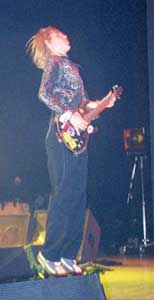 The guys came out and started with "Israel's Son" followed by "Emotion Sickness." Both songs sounded great live. Daniel was dressed in his usual dark pants and shiny shirt, Ben was shirtless, and Chris wore a black shirt and orange pants. The guys pretty much went through four more songs ("Slave," "Pure Massacre," "Ana's Song," and "Satin Sheets") without saying much to the crowd. After "Satin Sheets," Daniel told the crowd about how every time the group was in L.A.; people tried to convert them. To show the crowd how the bible isn't exactly always correct and "holy," he read a passage to the crowd. The passage mainly dealt with Moses' sacrifice of two rams. At the end Daniel asked the crowd if they knew what he did with those rams, he replied, "He fucking killed them." After a few words on Egyptians, Daniel got the crowd to do his Hallelujah thing; the crowd was surprisingly into it.

After that, the group ripped into "The Door." Afterwards Daniel got the crowd to sing softly "Body and soul, I'm a freak, I'm a freak," before actually getting into the song. The crowd seemed pretty much into it all. I was actually surprised to see how many people were there in silverchair t-shirts. Not to discredit them, but I really don't see a lot of their fans around, it was a very nice surprise. Kind of like something you hope for and welcome to see.

To close their set after about a good 45-50 minutes, Daniel got the crowd to chant, "We are the youth." It was really cool to see. People had their hands in the air and sang along. After about 15 chants, "Anthem For The Year 2000" began. Almost everyone seemed to be jumping up and down. Also during the line "And the politicians are so sure," Daniel changed it to "The politicians can suck my dick." The crowd ate that up. But when the song ended, the guys walked off the stage.

Overall, I would say it was a great show; it lived up to everything you hope for when you see a band for the first time. My friend, who went for Blink 182, even said that she was very impressed with them. She liked their set a lot, and is even looking into buying their albums. It was sad to see an end to it, I would have liked them to go on forever, but I'm glad I went. I look forward to next time. 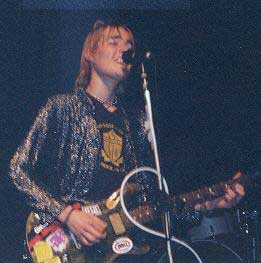