The Reading Festival has long been known to be a festival of great bands. Nirvana, Smashing Pumpkins, Offspring, Green Day to name a few popular bands that have played there. This was the first time I had been to Reading Festival since going in 1995. 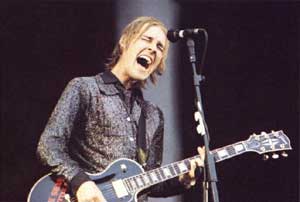 This year was much better than what I had remembered about before. The organisation seemed better somehow and for once it was scorching hot weather all day. Once getting into the Reading Festival as usual we were greeted with the lovely, timely smell of the portable toilets, a fixture of any good festival. After meeting up with some friends we found out that 'chair were due on at 6:00 p.m. This gave us some time to go and watch some other bands. This was basically Lit, Sick Of It All, Pitchshifter and Feeder. After Feeder had done an amazing set the silverchair crew came on to set up the stage. I noticed that it looked like they had some sound problems setting up and I saw of couple of roadies trying to get the drums going through the PA, also from what I gather silverchair's sound guy was having problems, either him or the Reading sound guy.

Finally after the backdrop of white silk on black had been lifted up the Taxi Driver intro came on.

Sure enough the group came out wearing the usual Neon Ballroom tour clothes. Daniel started instantly playing up to the cameras and making all sorts of faces.

The first song they ripped into was Israel's Son. This was pretty good and I had quite a good view at the front with some friends. The Reading crowd was rather mad and a few smaller people were getting pulled out and crushed. It was quite hectic but still fun.
Next they launched into Emotion Sickness. It was a pretty reasonable version, but Daniel seemed to be losing his enthusiasm at this point. The one person I thought I thought holding it together at this point was Ben, he keeps so much rhythm with the drums it almost pushes Daniel along, he just didn't look that interested.

During the breaks between songs Daniel said about how great it was to be back in Britain, and he remarked that Britain really is great, which got a few laughs. He also started going on about how you we all came here and should be getting on with our novels or something and that we were here at the Reading (as in books) Festival, a pretty funny joke although quite a few bands said it that day.

At the start of The Door, Daniel started going saying "Does anyone here believe in Jesus Christ?" to which everyone replied a huge NO! "Does anyone here believe in Satan?" To which the crowd all started shouting and screaming. He then remarked on how Great Britain had gone downhill since the last time they had played there, and how we had turned into an evil country now or something.

He then ask for the hallelujah bit and then the crowd screwed screwed it up and he said, "You have to all do it at once so it sounds cool", which was really funny at the time.

During the set again Daniel seemed to be having problems with his guitar. I noticed it especially with the Green PRS and on songs which are heavy orientated such as Slave and Freak that the sound was really bassy and also cut out on a few songs. Daniel seemed to be looking over at Bailey again and mumbling some words and looking at his guitar. This has happened at every show I have seen them at this year. What is wrong?

During Madman Daniel had changed around the structure of it a bit and interspersed it with new riffs and some new sections which sounded very reminiscent of Freak.

During this song I noticed I think that Ben completely shattering drumstick after drumstick and one of the roadies just completely laughing at him and Ben laughing back, it was quite funny to watch.

For the final song it was Anthem For The Year 2000, and the song stared and Daniel tried to get everyone to shout "We are the youth" when half the crowd were continuing to sing the first verse.

It was a hell of a sight to hear it through the Reading Festival PA and as soon as it had finished so had the band and they just walked off, no goodbyes, nothing.

It was a pretty special experience for me, seeing silverchair actually in the light instead of under dark sweaty club conditions. The sun was just setting and the sound was amazing.

All I seem to notice from each show I go to though is the lack of enthusiasm from Daniel. I'm not surprised being on tour that long.