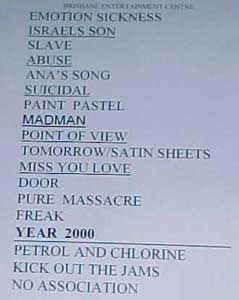 Well, all I can say about the final Australian show on this part of the tour is that I was blown away. All the effort I went to was sure worth it! After a four hour drive to get to Brisbane, my friend Kira and I arrived at the Brisbane Entertainment Center at about 6pm. After being patted down by the security lady (who had a hell of a lot of trouble figuring out what my textas were) we went on inside. We had a look at the merch bars and though of what we'd like to buy, looked for a friend I was supposed to meet (but never did) and just generally took in the surroundings. We listened over and over to announcements about Brian Molko (lead singer of Placebo) having tonsillitis (which led to Placebo not playing - damn!), and the fact that we could buy tour merchandise and candy from the candy bar.

After buying a shirt and paging my friend we tried to listen to sound check but had no luck as the doors were pretty soundproof. A bit after 7pm, the doors opened and we went in. Sadly, we had seated tickets, but weren't in a real bad spot. There were others heaps worse off than we were. We were on Chris' side of the stage. I noticed during silverchair's set that it looked like the teenies were on one side and the others were on the other side (which was my side luckily). Anyway, at 7:45pm Pre_Shrunk came on. I didn't really like them. They asked us if we knew that silverchair was playing later on and did we want to see them. They dragged the Triple J winner, Emma, on stage, and made the crowd yell "Emma, you're ace" which didn't work too well as most of the crowd wanted to be Emma. She proceeded to stick up her fingers at us all.

I left halfway during Pre_Shrunk's set. Sorry guys. We checked out the Animal Liberation stand and had a chat to the girl who was running it (one very happy girl at that) and soon people came out for interval. At about 9pm we went in to watch the setup for silverchair. When we got in, Ben's kit was up with the neon tubing and the crew were testing the guitars. After to listening to a bazillion songs the lights went down and the crowd went off. I tell you, I have never heard so much screaming in my life. And the chair hadn't even taken the stage yet! 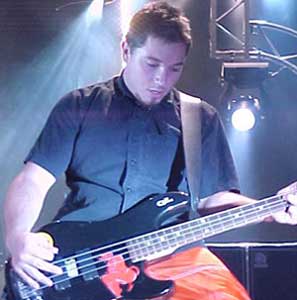 Pretty quickly, the Taxi Driver intro came on which caused more screaming and silverchair walked on stage and immediately broke into Emotion Sickness. For the first two or three lines, we couldn't hear Daniel, but that was soon fixed up and we could hear him perfectly. Emotion Sickness was excellent, then Israel's Son, then Slave, then Abuse Me where Daniel ordered "Everyone motherfucking jump!" and the mosh did. We couldn't really, sitting down and all. Then after that Daniel said "Thanks Brisbane. You are fantastic." They immediately went into Ana's Song. That has got to be one of the best moments of the show. All the lighters came out and there were heaps! It was beautiful.

Then Suicidal Dream (lighters out again and a lot of stomping from Daniel), Paint Pastel Princess (a lot of moshing in this one surprisingly), Madman and Point Of View. In there somewhere (after Suicidal Dream I think, note I said 'think') Daniel said that they were sorry Placebo wasn't playing. "We're sorry, we're really sorry. Even though we don't have to be, we are really sorry. Sorry. Their lead singer has a sore throat." He then thanked Placebo and Pre_Shrunk for touring with them. He then started to chat again. "Once I had a sore throat, and I still played." The crowd was screaming and I missed what he said next about Ben. Then, "And Chris once played with one arm for the fucking challenge!" More cheers. Then they did the start of Tomorrow and after Daniel screaming "One, two, three, four!" they broke into Satin Sheets. During this, Daniel aimed his guitar at certain sections of the crowd and we screamed accordingly. I was amazed at how high Ben's arms went before he smashed them down on his drums. Very high! 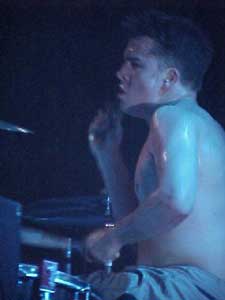 Straight after that, they went into Miss You Love and the lighters were out once more. Then Daniel said "Everyone, you can sit, you can stand, do what you want. silverchair shows are liberation, except for security and restrictions." He then told us he wanted to try something that nowhere else had been able to do. "Perth couldn't do it and Melbourne nearly did it. If you can do it, we will talk about Brisbane everywhere we go and say how Brisbane is the best place in the world. And we will personally hand out hundred dollar bills to every one of you here." Everyone screamed and Daniel added "Maybe." So he made the people on the floor sit down. "You don't have to if you don't want to, it's your choice, but it would be great if you did. This is great. The front row doesn't have to cause they are squashed."

The crowd sat and we were ready to stand seeing as we were seated, but he didn't ask us to. Instead, after seeing a security man standing there with his arms crossed, he walked over to the corner of the stage and started hacking on this guy something chronic. "Oh, look at Mr Big-fucking-I'm-gonna-stand-here-with-my-arms-crossed-and-do-nothing! Ooh!" and Daniel let go of his guitar and imitated this guy, folding his arms and leaning back. After doing that, he then stood up straight and said "Hey, it's okay, you don't have to do it if you don't want to," and waved his arms.

He did so many movements, almost worthy of a dancer. He looked really cool. He then thanked everyone for sitting and went into The Door. At that point we were sick of sitting down and ran up to the back of the seated area and created our own moshpit on the stairs (which takes a bit of skill I might add). When others who were sitting saw us, they ran up too and soon we had quite a lot of people up jumping and not a lot in the seats. Then a security man came and made us sit.

So we sat for Pure Massacre and watched the mosh pit go wild. Then when Freak came and everyone wanted to be "as cool as" Daniel [you]. We stood up in our seats and jumped and most others did the same. Most seated people were up. Except for those on the other side, which seemed to have all the teenies in it. There weren't that many actually. Then we went up to the back empty seats and jumped. 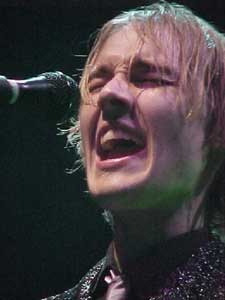 Next up was Anthem and Daniel got volunteers, this time he let security pick them. Since he did that, he only got about two guys. "Is there one fucking male up here?" he asked. "Security! Don't let any more females up here! We need more guys!" Then one guy with no shirt climbed on stage and Daniel was happy and made the crowd cheer. We did the whole "we are the youth" chanting thingy which you have to experience to get the feel for. It's no use listening to it on tape, you have to be there!

After that, they left the stage and we all started screaming "sil-ver-chair!" and almost straight away, Daniel came back on. Poor guy barely even got a chance for a drink! He had his guitar with him and announced that since Placebo weren't on, we'd get something a bit different and extra. He reminded us that he hadn't done this before and if he screwed up not to get mad. He then broke into a solo performance of Petrol & Chlorine which was excellent. The lighters came out again. He did screw up, and anyone who knew the words and was listening (which I am sure everyone was) would have picked it up, but he corrected himself without missing a beat. I was very impressed.

Just before he finished, Ben, Sam and Chris came back on and after finishing Daniel yelled "KICK OUT THE JAMS MOTHERFUCKER!" and they went into the MC5 cover. There was a different intro to No Association, which threw everyone off at first, but everyone soon got into it. Chris really got into his bass. He bent over it so far, I swear, his guitar was about 10 centimeters from the floor! And I was glad that we could hear Sam well, I hadn't been able to pick a lot up from the Melbourne show recording and any other bits I have heard. Then it was all over. They dropped their instruments and quickly left the stage. I was expecting that, but still was sad to see them go. I can't wait for them to tour Australia again, and next time, I'll definitely be down in the mosh! silverchair, you ROCKED HARD! 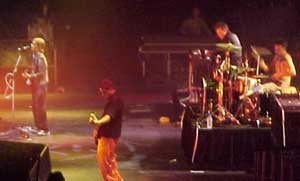