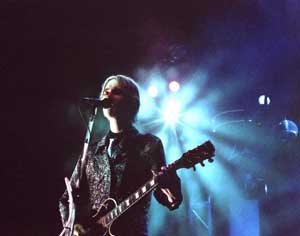 When Triple J announced that Melbourne Park would be the next venue to host the 'chair, the majority of Melbournians probably asked themselves..."where?" Better known as The Tennis Centre - home of the Australian Tennis Open, and the occasional monster truck rally...many people speculated that not even the mighty silverchair could get this place rockin' - they obviously had no idea what band they were talking about... 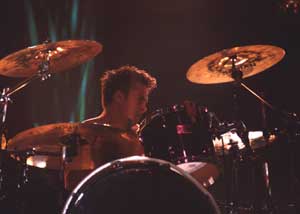 The atmosphere was electric. From the moment the doors opened, everyone in the arena was grinning ear to ear, completely psyched up to see silverchair with it being 5 long months since they last played in Melbourne.

Pre_Shrunk and Placebo did an excellent job of pumping up the crowd. The mosh pit was so tightly packed with people constantly pushing and shoving to get their place, that many people had to be dragged out by the wall of security guards while the silverchair roadies were setting up all the gear. The crowd screamed in anticipation as they recognized the equipment - Daniel's black guitar ("ban duck season - big guns little dicks") and his infamous red SG, receiving the loudest cheers.

The actual stage setup was a sight to be seen in itself. A white curtain had been covering the silverchair stage and when it was pulled back, everyone admired the extremely cool-looking backdrop. With a steal-like arch, the satellite from the "Anthem" video and numerous disco balls hanging, it was definitely a very clever and artistic design, which complimented and certainly added to the whole Neon Ballroom theme of the evening.

When the lights finally dimmed and The Taxi Driver theme "are you talkin' to me?" blasted through the PA, the crowd absolutely erupted with a deafening roar of screaming and yelling. 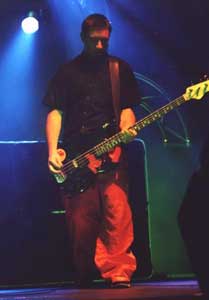 Four shadowy figures eventually sauntered on to the stage, met with even more cheers as they burst into "Emotion Sickness" without a word. It's a perfect opening song because it has a bit of everything. With the raw emotion and absolute power and beauty which leaves the audience in complete awe, as well as those louder, rockier bits which pump everyone up into a moshing frenzy. It was amazing listening to the crowd because just about every person in the room was singing along word for word.

No sooner had they finished "Emotion Sickness", Chris began the familiar bass intro of "Israel's Son" with Daniel prowling around on the left side of the stage, pointing his guitar at the crowd and making interesting gestures with his hands before the guitar part kicked in. Later in the song, Daniel ordered the crowd to put their "hands in the air" to which they obeyed and jumped around with their hands sticking up whilst screaming out the lyrics.

The opening riffs of "Slave" were ripped into immediately afterwards, during which the mosh pit was extremely intense with numerous crowd surfers going over the top to escape the sweaty mass of bodies down the front. Without a word from Daniel, they began the very popular intro to "Abuse Me" which received many delighted yelps from some of the younger fans in the audience. Daniel instructed "every mother fucker JUMP!" during "throw the sailors overboard" which really got everyone in both the pit and the seats rocking.

"Ana's Song", being the band's current single was received with the crowd singing along and a couple of lighters went up around the seated part of the arena. The keyboard part adds to the song and makes it sound very full live. Sam, seated on the far-left side of the stage was doing some very impressive maneuvers with his keyboard. The pink lighting during the song also added a great deal to the overall effect. The lighting effects during the entire set really emphasized the different moods of each of the songs and were very cool to look at. 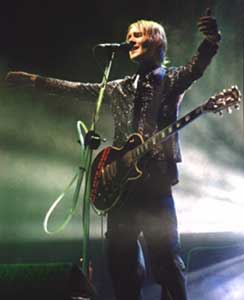 "Thanks Melbourne. All right...after 3, we want you all to say 'hello Australia!'...but not yet, after 3. Ok? Are you ready Melbourne? Are you ready on the balcony? YEAH! 1...2...3" The crowd screamed what could possibly be made out to be a very loud 'HELLO AUSTRALIA!' "That was good, but I didn't understand...it was great anyway. What? Oh...hello Australia, thanks."

Without another pause, they broke into "Paint Pastel Princess", followed by an unforgettable version of "Madman." The stage was lit up with a yellow light, and Daniel strutted around, stopping first in the left corner of the stage, then over to the right where he stood with Chris and rocked out, completely thrashing the shit out of his guitar. There were a lot of different guitar parts added to the song which were unreal. "Madman" was definitely one of the highlights of the set, making the entire audience go completely nuts.

"Thanks...we love you Melbourne, you're very kind and you're all very nice, and thanks for all dressing up for the occasion. This show is also being um...um...filmed for...what's it being filmed for? Channel [V]…but it doesn't mean anything to me because in our household we don't have pay T.V...so we watch educational programs such as...math blocks on ABC...ok."

"Point Of View" was a nice surprise for the Melbourne crowd because the band didn't play it last time they were here in March, again the lights were fantastic.

"Thanks, this is our number 1 smash hit single." For those who hadn't heard about or read reviews from any of the other recent shows, the transition from "Tomorrow" into "Satin Sheets" - lead by Daniel screaming "1, 2, 3, 4!!" - was definitely a bit of a shock and surprise. 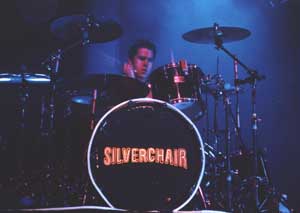 After the energetic "Satin Sheets", it was time for everyone to relax for a little bit, and mellow out with "Miss You Love." This was a particularly beautiful version of the already amazing song, with many people putting their lighters in the air and swaying with their hands above their heads.

Daniel then settled in for a bit of a chat with the audience, getting everyone to participate in their little experiment..."Yes. Yes please. If you scream, we'll stand and appreciate. Ben will appreciate. Ben is showing his appreciation by rising from his stool...otherwise stuck like concrete to his...arse. All right…um...I don't know if this is...is this live on the radio? It is?...oh...ok, well the radio listeners can go to the toilet 'cause we're going to conduct an experiment. Ok...here's the deal Melbourne. No one in Australia can do this...I swear to fuckin' god! No one we've been to can do it...so if you do it, you are the reigning premiers of the world! I swear to God, you'll probably be the first ever rock crowd to do it. So are you ready? Will you participate? All right. Here is the deal...everyone upstairs, stand...ok. Everyone stand. Stand tall, stand proud. Everyone on the floor...sit. Yes, come on, show your appreciation by sitting. Do it! Perth couldn't do it...Adelaide couldn't do it...come on...just get down low and go go go!!! There's a fire in the building. Oh fuck, there's a fire! Sit...quick! Oh the front row isn't doing it...awww, no don't...don't...you all...do it! That looks fine! That was great, oh yeah…you all look good. Now stay there. Just stay there, stay there...don't get up. This is very important. Has anyone got a camera? Oh yeah... it's being filmed. There's lots of c-a-m-e-r-a-s...lots. Ok, you can stand back up now and we appreciate. We might not look like we 'preciate, but we 'preciate very much. Yes. All right...all right. Can I get a Hallelujah? Can I get a Hallelujah? Hallelujah...can I get a hallelujah? CAN I GET A HALLE-FUCKIN-LUJAH!?"

"The Door", as it always seems to be, was one of the most rockin' moments of the night with Daniel instructing the crowd to "JUMP!" and adding some very cool guitar bits to it. The band stopped for a moment for Sam's solo, "Sam Holloway on keyboards!"

"Pure Massacre" and "Freak" came next, causing the already intense mosh pit to go truly insane. They stopped during "Freak", letting the crowd sing "body and soul, I'm a freak." 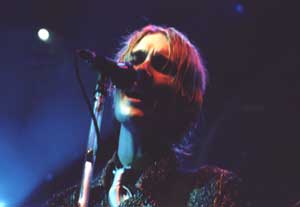 Daniel was very talkative throughout the entire show and he seemed to be enjoying himself. The selection process for the "Anthem" choir was very entertaining, especially for the female members of the audience..."All right...all right. We need some fucking volunteers, all right. Put your hand up and I will pick you, all right...whoever does the most loving thing gets picked. So whoever...whoever can shoot me the most love. Yep...you, yeah you...yeah, you're shooting love. You as well, the blonde one...yeah, the one that's about to...yeah. Ok, we need guys. Yeah. The guy with no shirt, yeah you look good. Um...yeah you. Yeah, you're shooting love. Shooting love like a machine gun. All right, yeah...we want you as well because you're just about to fall...Hey! Hey! Wrong direction...yeah...we want her. Um, yeah...you! You! YOU! YOU! YES! YOU! YOU! YOU! YOU! YOU! FUCKIN YOU! Yeah...you as well...you as well, yeah all the guys with their shirts off. Take your shirts off and come up and expose the body to the beautiful Melbourne women. Yeah...you as well. With the glasses...yes. You. All right, it's starting to look very promising for the 'chair. All right. Oh, yeah you! The guy swinging the shirt 'cause he thinks he's a stripper. Yeah, expose your muscle. Oh man...that was very...athletic. Give him a ringer shirt so he can train in it when he gets home. Have we got bonds? Hey, we're not starting until that guy comes up. He was too good. He jumped off a fuckin'...oh...a balcony...sorry Triple J, I forgot. All right, yeah...this guy as well. Look, look, I did that for you girls. I did that for you. I am here for you. I did that for you and you only! Triple J listeners, we have naked men on stage..."

"Anthem For The Year 2000" was a lot of fun, with everyone singing, dancing, and just rocking along. Ben's powerful drums commanded the song, with many people in the crowd 'air drumming' the beat along with him. Daniel got the crowd to sing "we are the youth" numerous times before entering into the rest of the verse. They all then dropped instruments and walked off for about 4 or so minutes before returning for the encore.

Anyone who had read about the other shows on this tour, knew basically what to expect for the encore and were waiting for it with much anticipation. An energetic cover of MC5's "Kick Out The Jams" started with Daniel yelling "Kick the jams motherfucker!" and had everyone jumping, even those who had never even heard the song before which shows that silverchair are definitely a band who can get their crowd pumped up and rocking throughout their entire set.

"Spawn Again" was the show's closer. It's certainly silverchair's heaviest and most intense song to date with each member of the band going off, getting totally immersed in the song and putting their all into each and every note. The night ended with Daniel screaming, Chris drawn over his bass belting out the heavy riffs, Ben beating his drums like a madman and Sam triggering the samples of sirens and breaking glass. All ending up in one giant ball of feedback, mixed with the drowning noise of the screams and yells of the crowd who had just been treated to a show of a lifetime.

silverchair have that something special. No other band can perform such a fantastic live show night after night with crowd interaction, mesmerizing lighting effects and awe-inspiring songs which are nothing short of spectacular. They just get better and better each time they come back - Melbourne is already hungry and waiting for more. Melbourne Park has never rocked so hard in it's history - thank you silverchair.