This was the first interview we ever conducted with the band. We believe it was their first Melbourne interview.

They had just been signed to Murmur/Sony and the Sony rep had rung us up with instructions: "Don't mention their ages in the article but we think they might do well in your area i.e. since we're on the surf coast." They have progressed somewhat since then. 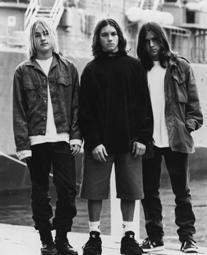 Q. How did you come up with the name?

A. We were all over at the drummer's house and we were requesting some songs on the radio and one of them was oh..."Sliver f**k" or something by the Smashing Pumpkins and the other one was Berlin Chair. We wrote 'em down and someone wrote "Silver Chair" instead of Sliver Chair, and that's how silverchair popped up.

Q. Why the name change from Innocent Criminals?

A. We started to get sick of it and we found it was a bit of a kids' name. We wanted something a bit more mature so people didn't think of us as kids.

Q. Who are your influences?

A. Nirvana, Pearl Jam, Stone Temple Pilots, Soundgarden and Alice in Chains and that...

Q. What makes your style your own?

A. Probably 'cos we've tried to get our own style but not copying people. We like to think we've got our own style. It's not really a different style, it's a bit of a cross-between. We like grunge. And we've added harmonies. The singer did all those himself.

Q. Can you give us some background on the 4-track EP (Tomorrow)?

A. Blind, that's the heavier one, that's a really good song, that really gets you going and it's a lot heavier than the other ones and we've probably started up more of those heavier ones than ballady ones. Acid Rain we like. Tomorrow was probably the first strong original that came out of the band. Stoned, well none of us really liked that but Sony thought it sounded great so we thought we'll just put it on there for a throwaway song or something. You seem to have come from nowhere to be doing quite well.

A. There was a Nomad show on SBS and they were running a competition called "Pick Me" and so we entered that. It was for bands without contracts and we entered that with 800 other bands and they picked us and said "your prize is a film clip." So we made a film clip and one of the reps on Sony was watching and he told one of those guys who signs new bands and here we are now.

Q. You're coming to Melbourne. Do you know your venues yet?

A. Yeah, we're coming to Melbourne on Thursday 29th of September and we're playing The Espy in the Gershwin Room with Superman and Augury, and on the Friday we'll be playing at the Empress of India Hotel opening for Paintstripper and The Affected.

Q. Are there other tracks in the works?

A. We're gonna try and get an album out by Easter.

Q. What can punters look forward to when they see you?

A. Blind and there's a song that's....oh shit, you just couldn't even describe it. There's a song about growing up called Cicada, that's a fairly full-on song. There's another one about war.

Q. How did you guys meet?

A. We've known each other since kindergarten. We get along well together otherwise we wouldn't be here now.