After reading the great reviews sent in from other Big Day Out shows Chairpage was eager to get to Sydney to check out how the long break has affected the 'chair. We also wanted to see how the new tracks translated to live environment and what reaction they received from the throng. 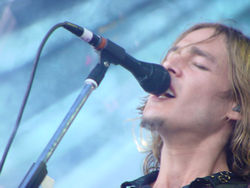 After a brief blast of the Star Wars theme Silverchair calmly walked on stage and were straight into "Emotion Sickness". It was warmly received by the crowd before being thrust immediately into one of the new "Diorama" tracks, "Without You". Without pausing it was followed by the inspiring "Paint Pastel Princess". With each song the crowd was building momentum.

I started to think.... hey this is a relatively mellow start to the set. Unusual for the 'chair. That thought was short lived as the stage erupted with "Israel's Son". A large part of the sell-out crowd (rumoured to be 52,000) started to jump and dance, taking me back to Rock in Rio 3 for a short while. Pausing briefly at this point Daniel advised that next "is a new song".

"One Way Mule" in its newest form growled and thumped across the stage and into the crowd. Awesome! 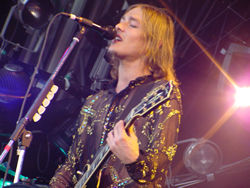 Daniel thanked Sydney and introduced the next track as "a quiet song so you can rest". Rest the body perhaps but not the vocal chords as the band swung into "Miss You Love" then straight into "Ana's Song". Both tracks were supported and accompanied by strong vocal from the crowd... and this Chairpage reporter... :-). Daniel then mentioned "objects on stage often appeared larger than they actually are".....

Next was a track this reporter has been waiting months to hear live. "World Upon Your Shoulders" is a relatively mellow, meandering masterpiece with a central grab that waves and crashes through a wonderful melody. Daniel's vocals are amazing. Wait until "Diorama" is released. You are in for a aural experience. The incredible applause is testament to it. 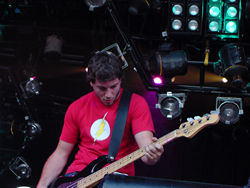 The becoming familiar intro. signalled "The Greatest View" with the crowd getting increasingly animated and roaring their appreciation. Daniel paused to thank the crowd.... "thank you all, thanks for not throwing stuff". This somehow prompted a mental genius to throw a bottle striking Daniel in the face..... Daniel, taking it in his stride said to the crowd "thank you for showing how independent you've grown" before launching into "Slave". The band added extra riffs both part way through and at the end.... I think even one or two more than Rio.

At the conclusion of "Slave" Daniel quipped "that was vintage 'chair for you". He then introduced Sam Holloway commenting on Sam's new sleeveless look and "beach tan". Julian, the new additional tour keyboardist, wanted his photo taken in front of the crowd so Chris willingly obliged while Daniel sang a few bars from Tina Turner's "What's Love Got To Do With It". Very well done I must say. Next Daniel asked the throng "are you fuc*ers ready to jump?".

Well, we wanted to find out how the long layoff had affected the 'chair, how the new tracks sounded live and how they were received. The short answer is the layoff has not harmed the live 'chair at all, they were incredibly tight, the new tracks were awesome and very well received and appreciated. 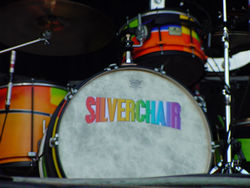 You want a whole lot of loving and shoving, then come to the Sydney Big Day Out, You'll get plenty.
Thanks to Amen, System of a down and Shihad, I was deaf by the time Silverchair came on.

Silverchair finally appeared on stage at around 7.15pm, Daniel was wearing those crazy striped pants again and Chris and Ben looked like their casual selves.

They opened with Emotion Sickness; it was a very rocking version that left the crowd with their jaws to the floor. It was excellent.... probably my favorite of the night. Then came a new tune, which I assume was Without You as it was quite heavy. It was a good song but I couldn’t really hear what Daniel was singing, he was also doing that weird jaw thing that he did during the Neon Ballroom tour.

Next was Miss You Love and Ana's Song, which received a warm response, you could feel the love. A new song then followed, Daniel didn’t say what it was called, but I assume it was World Upon Your Shoulders, it reminded me of Paint Pastel Princess a bit, quite good.

Daniel then introduced the new keyboardist Julian. He got on centre stage and took a photo of himself with the crowd behind him, a Kodak moment i'd say.

During The Door; Daniel was hit in the head with a bottle. It halted him from singing a few lines, and I believe Daniel was left with a bleeding cut. Though I may be wrong, as I didn't have the greatest view.

It was around this time that Daniel starting singing a cover version of “What’s Love Got To Do With It?”, very funny. Ben added his funky drumbeats, it only lasted around 15 seconds but it was pure entertainment. The last 2 songs were Anthem Of The Year 2000 and Freak which finished off a memorable gig, Daniel fiddled around with some guitar effects for a minute or so and then he left.

I’m deaf and can’t hear the sound of my fingers typing on this keyboard, it’s good now I can’t hear my mum yell at me.