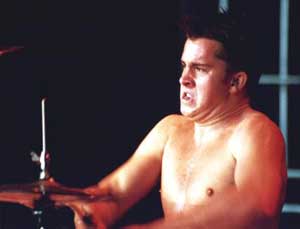 silverchair was the opening band for Red Hot Chili Peppers at Sjöhistoriska. A total of 14,000 tickets were sold and it was an amazing day to rock with the 'chair.

silverchair took the stage at 5:45 p.m., and like almost all of their 1999 shows they opened with Emotion Sickness. 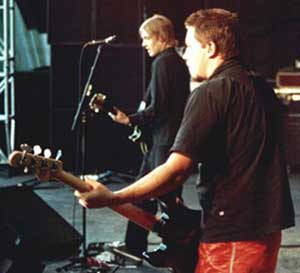 This particular song is my favourite and it also was a good crowd pleaser. It was light outside and the lights couldn't be seen that well, but the sound and stage setups were among the best ever.

Next up was Israel's Son. Everyone seemed to like it. During the "put your hands in the air" part, a lot of the crowd went into it and reached their hands up and screamed along. Daniel was very into it. Chris had some problems with his bass but he quickly got a new one.

After Israel's Son came Slave, a real heavy version. I noticed that Ben broke his drum sticks three times during this song!

During Abuse Me, Sam was really into his keyboards and played brilliantly during the whole song. The lights by Hugh Taranto were awesome on this song -- it had darkened a little bit outside and it was great.

After some guitar distortion Daniel broke into Pure Massacre, which contained two more choruses than usual. It was really heavy and the crowd liked it a lot.

Ana's Song is a popular song in Sweden. A lot of new silverchair fans were attracted by that song. Many people in the crowd sang along the whole time and girls cried and screamed. Daniel's voice was in great shape and he seemed happy that he got good response about this song.

Miss You Love seemed to be the girls favourite -- can you understand why? Many girls sang along and everyone seemed to like it a lot. Sam added really nice effects on his keyboard during this song. 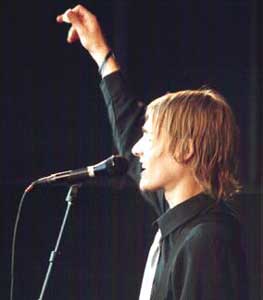 Next came Satin Sheets, a surprise because it wasn't on the setlist. It seemed to have more melody than on Neon Ballroom and there were two more choruses.

Paint Pastel Princess was the highlight of the night. All four guys performed it perfectly and the sound was really good. Daniel's voice is like a dream when it is at its best, and it was this night. He seemed to be in a great mood as well.

A heavy and fast version of Madman followed. Daniel played some solos during the song and it was awesome. Everyone one was into it a lot.

Before The Door Daniel talked about ABBA and Roxette, quoting a Roxette song which has the lyrics "dressed for success, shaping me up for the big time baby!" Sam played perfectly on his keyboard once again and Ben really was into the drumming. They added some new delays during the song with some really cool guitar and bass parts.

Then it was time for Freak, one of my favourites. The sound and lights were awesome.

Anthem for the Year 2000 has been number 1, 4, 7, 2 and 3 in different Swedish music charts. It has been on numerous compilation CDs and it has gotten a lot of air time on TV and radio. When the crowd was into singing "We are the youth," Daniel got a flag that was thrown by a girl in the crowd. He pulled his shirt up and started to wank the flag a bit. People in the crowd were shocked but most people just laughed and thought it was really funny. The sound was good and Daniel made his very special "moves" during this song. It was a really melodic version with a lot of chorus and heavy parts with the guitar.

silverchair is a band for the future, and let us all hope that we will see them again in Sweden soon. As for myself, I want to go to North America to see them soon! 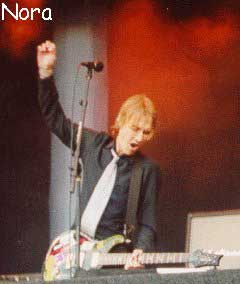 The gates opened at 2:30 p.m. and we got the coolest places: right in the front and in the middle. The first band, Sahara Nights (or something like that) started playing at 4:30 p.m. Next were silverchair. They started at 5:45 p.m. and everybody went crazy. There must have been more than 30,000 people.

Daniel talked quite much, about how much ABBA and Roxette had influenced his music, he counted to 10 in German just to tease the crowd, then he said that there was a place in Newcastle called Stockton. He kept calling us "lovely Swedes." He threw a guitar pick at the audience but people didn't see it and it got lost somewhere. Then some girls from Norway threw the Aussie flag at him, he took it and started "fooling around" with it (use your imagination). Later on he showed his belly to everybody, which caused a huge wave of wild screams by the crowd. After Anthem, silverchair left without saying a word and didn't come back.

In the end, all I can say about Probably '99 is that it was amazing! I can't wait 'til the next time silverchair come to Sweden…