When we got there we checked the place out and tried to find the stage where silverchair would play. Some 90,000 tickets had been sold and the same day there would be big bands like the Smashing Pumpkins, The Prodigy, Primus and Mötley Crue (Smashing Pumpkins kicked ass).

There were seven stages at the festival. The green stage area, where silverchair played, held about 18,000 people. We stood at the front and leaned against the stage. We intended to stay there from 2 p.m. until silverchair were scheduled to come on at 7:30. 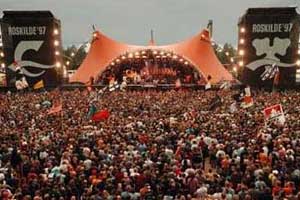 There were two bands before silverchair. The first one was pretty good, but the second sounded like shit and we thought it might when we heard their name -- Östkeyst Hustlers. It turned out that they were Denmark's most popular band, and nearly 20,000 people showed up to them. And there we stood at the very front! So after 30 minutes with this crowd, I felt so bad that security were forced to drag me up and take me backstage. I sat down outside the backstage exit to breathe a little, and after about 20 minutes, who is there right beside me but Ben Gillies! He was talking to a Danish girl who I had talked to before. I quickly asked for a photo, and he did this face for my camera. I had no paper or pen for his autograph. He kissed the girl and then went back in to the backstage area.

Soon, Bailey Holloway came out and started tuning Daniel's green PRS. Then John Watson popped his head out from the side of the stage and stood there for a while. (I took a pic!)

The curtains were taken down and I saw the band members' feet. The show was about to start. Everyone got a little chocked because there they stood and Daniel had cut his hair up to the ears! And coloured it too, yellow/brown. He looked like he did in the Australian Tomorrow video when he was 13. Among the songs they played:

For the encore, Daniel wore some cool black shades! He said some funny things too. He started the show with, "Hey! Hi! Denmark rocks!" Between songs, he said such things as, "Wanna do a cool thing? [crowd says 'Yeah!'] Our sound guy likes to hear his name, so now we're all gonna do this thing, OK, we all scream 'Wardy!'" He then screamed that many times and then said, "Now you, OK?" The crowd did as he had done. 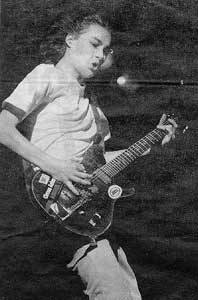 Then, as usual, he introduced Bailey as the guy who had worked with Black Sabbath. And he also asked who was there since its a huge festival. "Is there anyone here from, uh, Denmark?" [crowd roared] Anyone from Norway? [crowd roared again] Anyone from, uh... uh... Sveden? [not pronounced very well but the crowd roared again] He he, anyone from Croatia? [crowd reponded with a mixture of yes and no] Ah, you fucking shits say yeah on everything so I don't care any more!" He then threw away the paper he was reading from.

"This is a little song that we don't usually play that much," he said. "It's a song by Minor Threat, and its called, he he, Minor Threat!"

He also changed his lyrics a little here and there, and forgot them in Freak! In Tomorrow he sang, "You think you can keep on going living like a child. Mmmmmm, strongly doubt it," and "The water in Denmark is very hard to drink."

At the end, when it was time for Israel's Son, Chris started the bass intro and Daniel quickly ran over to Ben and told him not to start playing. Chris stood there for like 15 or 20 bars and just played the intro until Daniel finally started playing. Chris seemed a little irritated by the delay.

Ben threw his sticks out into the audience at the end.