Since it was my first silverchair concert, I wanted to make it memorable. It happened to be on Valentine's Day so I was a bit excited to see my favorite band. Christy, Amanda and I left my house around 4:30 p.m. and headed down to Mississippi Nights. We missed a turn, got mixed up and after a few turnarounds, we reached our destination. There were about 20 people standing outside so we parked and went to line up. 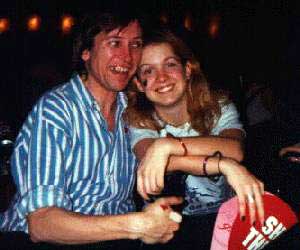 The doors opened around 8 o'clock. We walked in and spotted Pete, so we walked over and chatted with him, as well as Jenn (The Llama Grrl) and Laura. At around 9 o'clock the opening band, Handsome, came on. They were so good! They put on an amazing show.

After a break, the lights dimmed and the crowd went nuts. We were in front near Daniel's stage position. Circus music played and people started jumping around. Because the club is so small, the circus backdrop was not used, but they did have this really strange headless doll hanging from the ceiling.

I looked to the right and saw Chris, then Ben, then Daniel walk out. Ben had no shirt on, Daniel wore the "Freaks" movie T-shirt, and Chris had on a shirt with a bottle on it. They ripped right into Slave and it was so awesome. Daniel immediately started jumping all around.

I was really glad that they played Roses because I heard that they weren't going to do it. Daniel said some pretty cool things between songs.

"Keep jumping around," he told the crowd. "It's Valentine's Day so spread some love!" He even said "I love you," which made the lovely lil' teenies go wild!

When Daniel sang "as cool as you" in Freak, he pointed at the crowd. And for the words "get a different disease" he sounded all scary and evil, which we all know he isn't! After they played Freak, someone screamed "Fuck you!" and Daniel replied, "Yeah, fuck you too!"

The performance of Cemetery was the highlight of the show. Christy and I were crying. It was amazing. 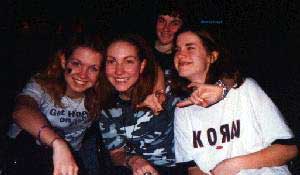 I noticed that Daniel has a new on-stage move similar to the way Jonathan Davis of KoRn dances. He moves his shoulders in a certain way. At the opening of No Association, Daniel and Ben were doing it together. He also did it a lot during The Door. On his red guitar he had a sticker that said, "You obviously have mistaken me for someone that gives a shit."

After Findaway, Daniel said, "Happy Valentine's Day. You guys rock!" When they did Abuse Me, Daniel introduced the second guitarist and said he was "our sexual guidance counselor."

"He played guitar for Deep Purple once," Daniel joked.

I was really shocked that they did Minor Threat. Before they played it, Daniel said, "We don't do this song very often but we're gonna 'cause you guys rock!"

After Cemetery, Daniel said, "Don't scream now, I'm busy. Talk amongst yourselves, I'm sure you'll find something neat to talk about. Happy Valentine's Day!" At the end of Tomorrow, Daniel and Chris simultaneously jumped at the last note.

During the entire show, there were two ladies at the side of the stage sitting and taking pictures. I figured it was two of the mums. I later found out it was Ben and Daniel's mums. During Israel's Son, they put their hands in the air and even laughed at Amanda when she told one of the annoying girls to shut up.

Daniel forgot the lyrics a couple of times to a few songs. He stumbled on Findaway. He looked back at Ben and laughed. During Lie To Me" he lifted his right leg up and kicked it behind him. Chris did a really cool jump at the "go!" part. Daniel also forgot some lyrics at the beginning of Pure Massacre.

At the end of Israel's Son, Daniel did his normal thrashing. He took his green guitar off and smashed it on one of Ben's cymbals before throwing it down. He ran up to the speakers and pushed the guitar into them, making some cool distortion. He mucked around on the pedals for a bit.

After the show was over, we walked over and Ben was standing there. We had our picture taken with him and chatted with him for a few minutes. I touched the chain to his wallet because it looked like my necklace. I told Ben that KoRn and Helmet had played at Mississippi Nights and he said, "Here? Cool!"

I decided to look for Chris and Daniel. I peek around a door to the backstage area and there was Daniel looking right out and we made eye contact. He then walked out and I asked him to sign something for me. He did, and I asked if I could get a picture with him. He said he had to go but I took a quick one of him alone. Then he walked off with my pen (which, actually was Laura's) and I yelled "Daniel, that's Laura's pen!" He looked back and was going to throw it but handed it to Watson and he threw it at me. It landed in front of Daniel's mum and I excused myself and picked it up.

Everyone headed out the door and we kind of followed. We took a few more pictures of the tour bus and while they drove off, I was running alongside. Daniel was in the front and I took a few pictures of him looking. It was pretty funny.

The guys have so much energy and can put on such great shows. and they are great guys, personality wise as well! Pete told me that the guys really liked the venue and that they will probably be back. He also said that the show was the best he'd seen. Needless to say, I thought the show was freaking amazing! I can't tell you how awesome it was.

There are plenty of reasons why a grown-up critic might toss his scorn into silverchair's lap. The three members of this Australian band are only 17 years old, they are freakishly derivative of Pearl Jam and Nirvana, and they spell their name with a lowercase "s."

To cynics, the silverchair machinery smells of snake oil and focus groups. But even if the band is "the Menudo of grunge" (as one wag suggested at Mississippi Nights last Friday), there's no denying that the tadpoles really play their instruments and that silverchair's state-of-the-art gloominess appeals to a big audience -- in this case, a nightclub equally divided between young ragmuffins and older, classic-rock aficionados.

A sure hint that this would be a meat-and-potatoes rock show was the onstage appearance of two DJs to hype their morning drive-time zoo crew.

The two fellows were just doing their job, of course -- and so was the band, which shortly thereafter marched onstage to a circus-calliope accompaniment.

The first slamming chords of Slave established the headbanging tone for the evening, and one millisecond after the strobe lights kicked on, dreamboat guitarist Daniel Johns obligingly whipped his golden locks like a mermaid emerging from the sea. It was a calculated bit of rock theatrics, but the girls swooned, as they would do throughout the evening whenever Johns did something coy or cocky to call attention to himself.

Likewise, drummer Ben Gillies employed the uber-rock technique of Kiss' Peter Criss; shirtless and begloved, he crossed his sticks high overhead in the moment before each drumbeat. The only thing missing was flash powder. (To his credit, bassist Chris Joannou was unobtrusive and avoided tripping over the tiny Stonehenge at his feet.)

The material from the debut frogstomp album hasn't aged well. Pure Massacre is the kind of simplistic diatribe you might expect from a callow teenager living in an isolated country like Australia, and Suicidal Dream, with lyrics that describe "voices telling me what to do," is almost laughable in its sub-Vedder self-pity.

However, the material on the new album Freak Show suggests that the band is evolving. The plantive single Abuse Me is a soft counterpunch at those critics who don't take the band seriously (ouch), and the delicate arrangement suggests that Johns now would rather steal from Kurt C. than Eddie V.

Likewise, the mournful Cemetery uses a string accompaniment to nice effect, The Door employs fanciful Middle Eastern tonalities, and Pop Song for Us Rejects is a jangly toe-tapper about (yet another) Lost Generation. Performed live, these songs provided a welcome relief from the stadium-rock orthodoxy that dominated the show.

When the band left the stage after a bombastic finale, a roomful of cigarette lighters that were ready for an encore were foiled by the miracle of child-proof design. Undeterred, the audience managed to shout the band back to the stage.

silverchair then provided one of the nicer surprises of the evening with a suitably punky rendition of the Minor Threat theme song -- a declaration of sobriety and solidarity that's almost as old as the band members themselves. The lads actually seemed to be enjoying themselves on this one.

But on the next song they reverted to market-department nonsense by pretending to smash their instruments -- without actually doing the damage and costing themselves or their handlers any money.

[Thanks to Sara (snaz22@hotmail.com), and thanks to Julia for their help with this page.]