I arrived with sister, mother, father, and friend Matt at roughly 10:20 a.m. to see silverchair at the Virgin Megastore in New York's Times Square. As we approached, we noticed a small line on the side of the building, so we asked an employee about the appearance of silverchair. 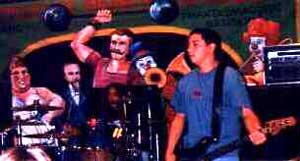 He informed us that the line outside was to see the band and that a limit of the first 500 would be allowed in. We looked for some friends at a designated spot but came to the conclusion that we were the first there and decided to stand on line, despite the fact that the temperature was dropping and that we'd have to stand there for at least 2 hours (silverchair were not scheduled to perform until 1 p.m.).

Matt, my sister Jenna and I got on line. My parents later returned with CD's for Matt and my sister along with complimentary videos given away with the purchase of a CD.

Within 45 minutes or so, the line began to lurch forward consuming all those not fast enough to go with it as some girl yelled "silverchair!" Immediately we all piled in through the small doors of Virgin only to find out it had been a false alarm. Matt, Jenna and I went back to the end of the line (which had grown since we entered the store on the false belief that they were really letting us in). Finally we were REALLY allowed in and Matt, my sister and I were the last of those permitted to descend the stairs to get a ground-floor spot for the show. Everyone after us was forced to watch from a level or two above. 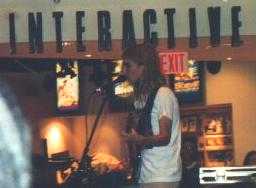 Around 12:30, we finally got onto the floor and until silverchair took the stage at about 1 the Virgin employees coaxed, yelled, and threatened us in an attempt to make us move back from the extremely small stage. Only a couple hundred people could fit in front of the stage, with no barricade between silverchair and the crowd. They were slightly elevated from us on a platform, but aside from that they were dangerously within grasp of screaming teenyboppers. After pushing through the small crowd I managed to land a spot which would only be a couple feet from Chris, who was positioned on the right side of the stage. I saw chairpage.com's Pete Walton in an adjacent cafe also on the ground level of the store and waved frantically to get his attention, but this only caused a surge in the crowd as many leaped, assuming I was pointing at silverchair.

But around 1 o'clock, silverchair did take the stage. The three band members walked on with relaxed hesitation. Daniel plugged in his green Page Hamilton PRS, Ben and Chris assumed their places, and within seconds Daniel began shredding through the opening chords of Slave, attacking the song with vigor. Daniel headbanged as if he'd downed Pixy Stix with a six-pack of Jolt Cola. Only seconds after the grueling five minutes or so of Slave they immediately jumped into an awesome performance of Leave Me Out. The pit was loving every second of it, though only slightly moshing due to the lack of space in the store. There was no (at least to my knowledge) stage diving or crowd surfing. Daniel played Leave Me Out nearly flawlessly, really getting into the interlude, swaying his head like mad. He paused and finally spoke.

"For a record store, this is a good crowd!" he said. 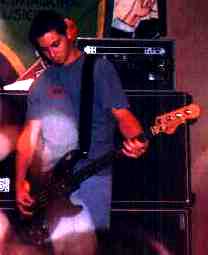 After making a quick switch of guitars to a different PRS, Daniel began the warbly, phaser-soaked notes of Abuse Me. After playing it even better than he did on the David Letterman show the night before, his microphone and guitar went out, although he continued as if nothing was wrong. After finishing the song a man hurriedly ran to Daniel and whispered something into his ear. Daniel asked the crowd to move back as the Virgin people had been doing so repetitively before but the crowd refused to budge.

"You have to move back, you've unplugged the P.A. which is pretty cool, come on, move back, line one move back, line two move back," he said, but even he couldn't help but laugh at our defiance. He even mocked himself and said in an effeminate voice, "Please move back."

Soon some angry looking employee came on and threatened that if we didn't move back, silverchair would not continue to play. Fans responded to this quickly and moved back. Eventually they had the P.A. up and running again and Daniel said, "This is going to be our next single" as they began playing Freak with as much intensity as before. During the first interlude, when saying "as cool as you," Daniel pointed to the crowd who returned the gesture, but only seconds later his mic went out again, and he finished the song again as if nothing went wrong. Ben then threw out his drum sticks to the audience, which did happen to fall into my hand as it did several others' hands and was wrenched down to the ground and stripped from me. Minutes later they had fixed the problem again and Daniel switched to a red PRS (which was apparently in standard tuning, for you guitarists) since he proceeded to play Suicidal Dream, an awesome performance of Cemetery, and Tomorrow. During Suicidal Dream someone told me my backpack was open and was broken in the pit so I was forced to enjoy the songs with less activity because I had to hold it shut. When Daniel reached the line "I'll kill myself from holding my breath" some guy next to me yelled "I hope not" in all seriousness. Then when Daniel reached the "help me, comfort me" line, a girl next to me screamed "I WILL!!!" to which Daniel did not respond.

After they finished Suicidal, Ben and Chris left Daniel alone to play Cemetery which held the crowd in an awe-inspired gaze. Daniel played and sang it with NO flaws! Ben and Chris quickly came back after Daniel finished and Daniel announced into the mic, "This is our grunge song," at which point they played Tomorrow, modifying the lyrics slightly to work the crowd.

Wardy (sound man Peter Ward) must have been having some fun with the mic effects because he put delay effects on three songs including when Daniel sang "Youuuuu wait til tomorrow." After Tomorrow someone yelled "Madman!" which Daniel grinned at and said, "This is a new song off our new album, Freak Show" and he kicked into a great performance of The Door.

Again, there were delayed vocal effects on the chorus parts. After they finished the song he said, "Oh yeah, we're supposed to be signing some stuff for you guys but we'd rather play some more songs so we signed booklets ahead of time so we dont have to feel like dicks. You can get them on the way out." Daniel then kicked into the song I had been waiting to hear all day -- No Association. Wardy put on the normal delay for the vocals then did something which was very cool -- he put delay on the mic for ben's bass pedal! No Association rocked and got the pit going, which led perfectly into the mad bass line of Israel's Son. silverchair played the frogstomp classic perfectly and ended with Daniel banging his green Page Hamilton guitar on his stack, on Ben's drums and cymbals, as well as his mic stand emitting all kinds of awesome sounds, though probably fucking up his guitar in the process.

After they finished a normal five-minute version of it (not the usual one where they improv as they did on the frogstomp tour), the crowd was told that there were pre-signed CD jackets available first-come, first-served to those who wanted them on the way out. This led to a stampede (one of several that day) in which kids and adults alike were crushed by people trying to squeeze up the escalator to get some signed jackets of Freak Show. Matt and I desperately tried to get some but the crowd was enormous so we decided to wait until it calmed down a bit. A Virgin employee then emerged from the crowd bearing several Freak Show jackets under his arm. I asked, expecting a negative response, if I could have one. To my shock he gave me one, which led to tons more people trampling one another to get the CD jackets. Matt also managed to get one from him before leaving.

As we exited the store to a snowing New York City street around 2:20, the Virgin employees walked outside and threw up tons of signed CD jackets. My sister pocketed probably 10 and there were tons more strewn about.

All in all silverchair's 10-song set was awesome, especially since it was the first time I have seen them live. The crowd, though mainly teen girls, was good and the moshing wasn't too aggressive. Many people in the crowd did not know lyrics to a lot of the songs (though Matt claimed otherwise), but in the area I was standing, no one was singing, except for the chorus of Freak. The response to the new songs was overwhelmingly positive. Even skeptics were stunned. Despite accusations that silverchair's shows aren't as energized as before with the little improvisational jams, it was probably one of the best, if not the best, concert I've ever been to.