By RENAE
Photos by BEAU 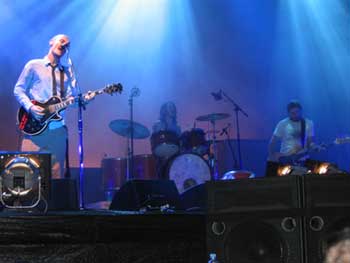 After a 3 year wait it was finally time for Silverchair to come back to Perth to play at the All Australian Rock It at Joondalup Arena. Expectations were high but for the Silverchair fans in the audience the band did not disappoint.

Being a 36 degree day we decided to wait until late afternoon to venture down as dehydration and heat stroke weren’t things we wanted to experience at a Silverchair show. We arrived in time to watch Shihad and Grinspoon who both played really well and rocked the crowd.

At 8:45pm Silverchair hit the stage with a huge response from the audience. They broke into a new song “If You Keep Losing Sleep” which opened the show with a funky sort of feel to it. The best way I can describe this song is a funky mash of music combined with some vocals which go from being a growl to being angelic. At times I wondered if Daniel was singing in English as I have no idea what he was saying! 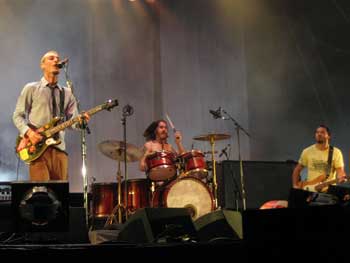 The band then moved on to some favourites from Neon Ballroom and Diorama such as “The Greatest View”, “World Upon Your Shoulders”, “Emotion Sickness” and “Without You” – all played to perfection. Daniel changed some of the vocals in parts but overall just belted them out without skipping a beat. The end of “Emotion Sickness” is one of my all time favourite things to watch. The band just seem to gel so perfectly during it and let go and the guitar teamed with Daniel’s sweeter voice tones come across almost like a lullaby. It really is beautiful.

“Sleep All Day” was the second new song we had a preview to. Again it is really fast paced with a constant keyboard beat throughout with funky overtones. It is almost haunting. Towards the end of the song I had images from a horror movie of someone running with that song playing in the background. Not sure why. May have been Paul Mac’s constant thumping but it’s a song that comes together great. Daniel was enjoying the end of it dancing around in circles. The only lyric I can remember is the word “secret” but would love to know the full lyrics to that one. 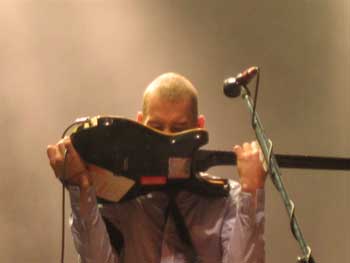 My all time favourite came next “Tuna In The Brine” and I wasn’t disappointed. The song gives me goose bumps every time I hear it and it was played so beautifully. I just wish I wasn’t standing on a garbage bin watching it, trying not to fall, so I could have just let it wash over me. It’s one of those powerful songs that truly embodies Silverchair as a band to me. I just wish the rest of the crowd felt the same. It was around this time that the band played “Luv Your Life” and “Paint Pastel Princess” – much to the disappointment to a lot of the crowd. As the show had been advertised as a rock show many punters, who were not necessarily Silverchair fans per se, came along expecting a balls out rock show. It never happened and they grew restless. I saw people walking out at this point and I also heard the abuse and “jukebox” requests start to be yelled out by drunken yobbo’s. The little bit of atmosphere that was there for me disappeared at that point never to return.

Daniel asked the crowd to scream at that point. Scream as loud as we could as if they were playing their biggest hit ever. “Across The Night” came next and it was a song that the band really seemed to enjoy playing. They looked like they were having a really good time up there and Daniel kept telling the crowd they were loving it. He mentioned something about them having a “moment” during the day but I’m not quiet sure what he meant by that. He did say that they spent the day at the beach and had heatstroke! 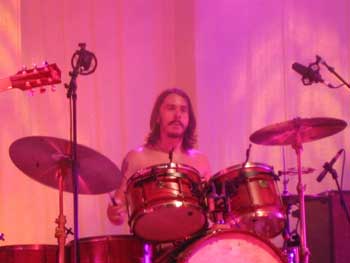 “Straight Lines” was up next and was dedicated to the bands friend Mike Austen with no explanation given. It started off soft with some high pitched vocals but then got slightly harder and faster with Daniel yelling/growling the vocals. The chorus is really catchy and the tune was running through my head for the next couple of tracks. “Ana’s Song” was up next followed by “The Door” which pleased the crowd who moved happily with the music. The guys seemed really happy and I noticed they were giving each other big cheesy smiles throughout the show!

Daniel said they were about to “get heavy on our ass” as they launched into “The Lever” which is so grunty and crunchy and a perfect rock song. “Mind Reader” finished off the set and was the song running through my head as I tried to get to sleep last night. It’s pretty rocky with a catchy chorus something like” They’ll know what you want” or “They know what you want” and something about a “Mind reader baby”. At the end of the song, after Ben, Chris and Paul had left the stage, Daniel stood guitar-less at the mic just growling “They’ll know what you want” over and over again with distortion. I really liked that song and can’t wait to hear it again.

All in all, from a Silverchair fans perspective it was everything we could want. A mixture of their last few albums mixed with 4 new songs played to perfection. For those in the audience expecting more rock and yelling about it – thanks for ruining the atmosphere and distracting us from the music. It wasn’t the best show I’ve seen the band play but a good show never the less. 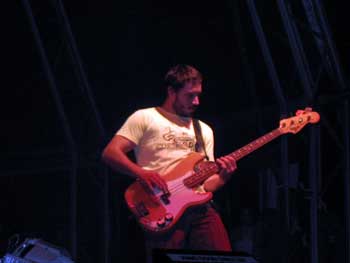 I haven't got much more to add, Renae pretty much summed it up!

I'm loving the new songs they played - once again different to what they've done in the past! How can one band have so many different sounds - I dont know, but its awesome.

They were really more rock/grungy type sounding - definitely catchy. They kicked off the show with a newbie - "If You Keep Loosing Sleep". Yeah definitely funky sounding, great vocals from Dan.

I think my favourite newbie was the second one they played - "Sleep All Day". They all looked like they enjoyed this one, hopefully it makes it onto the album or at least on a single! Could Paul Mac jump any higher off his seat?

Overall, one of my fav songs live is The Door - this song went off, and all those peeps who kept saying shit like play "Israel's Son" and what not finally shut up and got into the set when they played this! Probably that was the thing that pissed me off the most, all the "non-silverchair" fans who just want moshing music all the time. Unfortunately the majority of these peeps left the arena after the set saying they didnt like the chair's set - mind you they had been out in 36C heat all day and were drinking shit loads! But hey - who wasnt! People just couldnt appreciate good music when they hear it.

Anyways, the boys really looked like they were enjoying playing together again. I enjoyed the set, each time I see them play they just get better and better. Pity for all the drunks and non-chair fans who pretty much ruined the atmosphere for us. And to that frickin' drunk who broke my digital camera because he wasn't enjoying the set (might I add I had some great pics and video!) - thanks for nothing, besides ruining the atmosphere for us true chair fans, you cost me $600!

Cant wait for the new album now - and obviously the next tour!