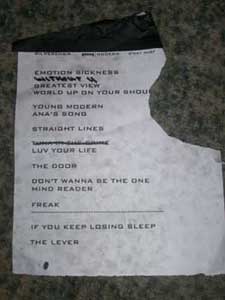 This was a long time coming...almost 4 years since the boys have come canada to play a show...last time they played 2 shows...i went to 1...i didn't make this mistake again...so this is the 1st of 2 shows...this show held in a "biosphere" this thing was hot!  This was probally one of the most intimate chair shows to ever happen...400ppl in this tent seeing the chair...bloody amazing.

The living end opened up and they pretty much kicked awhole lot of ass...it was a wicked show by the boys from the living end...then came the chair...they burst in emotion sickness(always amazing live...this song alone is worth the cost of a ticket) followed by without you, the greatest view (a personal fave) and world upon your shoulders...the songs sounded fine to me but daniel was far from a happy camper...the IFB thingy in his ear wasn't working at all and he said how they didn't get a sound check...and if something didn't sound right blame the sound guy cause he's perfect...good call.

After world upon your shoulder he broken into the 1st of the new songs to be played "young modern" i can't wait for the album to hear the studio version of this song...or any of the other songs...after young modern came ana's song which was done amazingly. 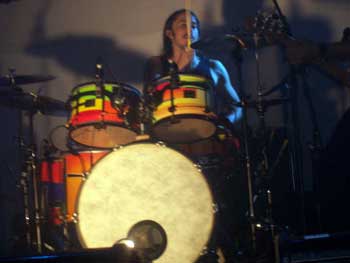 Straight Lines was next and i think it was safe to say almost the whole crowd had heard this song by now...its such an amazing song the way it builds...luv your life was next...a pretty much flawless version...then it was time to get our dancing shoes on and daniel introduced the next song "this is some old school silverchair" and busted into the door...this got the tent rockin'...his guitar solo done with his teeth was just insane...they followed up the door with midnight oil's "don't wanna be the one" i love this song...they do it so well...they followed this up with another new song mind reader which is another song i can't wait to hear...and before they headed off the played Freak...the crowd was going crazy for this song...such a good preformance!

After freak they left the stage and within seconds chants of "SILVERCHAIR" and "WE WANT MORE" were being screamed throughout the tent.  they re-appered and played if you keep lossing sleep...i think this is possibly my fave of all the new songs...it just makes me wanna dance and forget everything and just have a good time.  they closed with The Lever...and i was left in awe...seeing silverchair from the front row in a venue that held 400people...it was a once in a life time experience and something i'll never be able to forget. 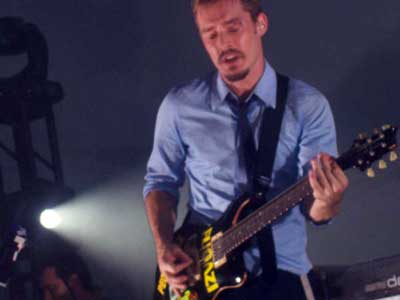