This was a perfect day for a 'chair show. It was a typical winter day in Los Angeles, sunny and mild with a nice cool breeze.  However, there was something not-so-typical about this day:  silverchair were to play their first LA show in four years.

We arrived at the venue around 7pm, and they started letting people in around 7:45.  The line was stretched around the block, and the fans were energized and getting pumped for the show.  I sensed that most of the people at the gig were long-time fans, many of whom, like myself, made the pilgrimage to LA from far away destinations.  But I was surprised to come across a number of people who were seeing silverchair for the very first time.

We got in, grabbed some drinks and waited though the opening act. Soon after they finished, people starting chanting "sil-ver-chair" as the sound crew finalized the set-up.  Finally, the lights went down and people went NUTS.  Everyone just screamed and cheered, it was incredibly loud and really awesome!  The new intro music started (sounding like a thumping heart beat) and then Paul Mac came on stage followed by Ben, Chris, and then Daniel.  They ripped into "Without You" and people starting jumping everywhere and sang along.  It was such a killer opening song, perfect choice!

Afterwards they moved straight into Emotion Sickness.  It sounds so good stripped down to the basics!  The crowd got to sing the "get ups" in the middle of the song while Daniel wailed away on his guitar and Ben pounded on the drums.  Next came a particularly rockin' version of The Greatest View.  The crowd continued to go off, and I was so impressed by how strong the band was.  The rest of the set included:

Encore:
If You Keep Losing Sleep
The Lever

Daniel was taking swigs from a bottle of Jack Daniels throughout the night – I'd say he was thoroughly enjoying himself.  After one swig he grimaced and said "Man, this stuff is strong!" and the audience cheered and egged him on.  During The Door, a kid got up on stage, and instead of running around and acting like a fool he went straight for the bottle of Jack Daniels.  It was quite amusing!

Another funny quote I can remember (I think it came after The Greatest View): "Yeah, Los Angeles, home of the body bag".  Ha ha!

At one point Daniel announced that it was Ben's "birthday", and proceeded to sing Happy Birthday to him as the crowd joined in.  He sang it in a very booming and manly Marilyn Monroe type of way…..it was pretty funny!

As Daniel began to introduce Straight Lines, the crowd just started cheering and screaming!  He said, "This is our new single…..Feel free to sing along….I'm sure you all know the…." But the crowd was screaming so loud that he just cracked a huge smile and stepped back from the mic without finishing the introduction.  There was no need for introductions at this 'chair show!

Daniel dedicated Tuna and the Brine to Kevin, the A&R guy from the Across the Night DVD.  He was there, and I overheard him say that he was no longer with Atlantic Records and that he was currently representing Warner (at least that's what I thought I heard).

Before The Door, Bailey handed Daniel his Page Hamilton PRS, and he strapped it on and said, "Hey Bailey, I'm completely missing a knob here!"  (I am assuming that one of the plastic volume/tone switches was missing on his guitar).  He turned back to Bailey but then quickly came back to the mic after realizing that it really wasn't a problem and said something along the lines of "Its OK, I can handle it, we're professionals here".  However it was really funny considering how Australians use the word "knob"!!!

Overall I would have to say that this was THE BEST 'chair show that I have ever attended (this was my 9th 'chair gig in 10 years).  I'm not sure if I'll ever see the 'chair in such a small venue again!  It was such an intimate and raw show….the Luv Your Life and Freak sing-a-longs were especially cool.  The crowd was really good and really LOUD – everyone was just so stoked and having a great time. The new tracks also rocked hard, and I'm really looking forward to Young Modern and hopefully some more US dates soon!!

Lost and late, I finally arrived to the El Rey Theatre after a long and anxious six-hour drive from San Francisco to L.A.  It had been eight long years since I'd seen Silverchair and it was beginning to feel like my first time all over again.  As I ran into the venue, I caught the last band East Conference Champions wrapping up their last song.  Unfortunately, my ticket had read that the concert would be starting at 9 pm, unlike the website that had listed an 8 pm curtain so I was sorry to miss what at the moment had sounded like a great performance.

As I made my way to the front of the venue, I squeezed my way as close to the front as humanly possible.  Little did I know of the true silverchair fan loyalty and dedication that would be surrounding me that night.  Having myself been a die-hard fan of the band since the "Tomorrow" video first aired on MTV in 1995, I was amazed to be standing next to a guy who had last seen Silverchair during their 1996 Santa Monica performance on the Pier where the unfortunate "bottle incident" had taken place.  I was equally as thrilled to be standing next to another fan who had flown in that day from Denver, Colorado to catch the show that night.  As I listened to those around me, I soon found that people had come in from all over the U.S. to witness what would be the most unbelievable performance I had ever had the honor of being a part of.  My fellow dedicated fans had not only come from all of the country but had also been fans for so many incredible years just as I had.  There were people doting Silverchair shirts from the Neon Ballroom and Freak Show days!  There was such camaraderie with the crowd.  I felt instantly at home.

As the curtain opened and the house lights faded away leaving only a semblance of light from the chandeliers above, I felt my heart race with anticipation.  I first saw the faint but familiar silhouette of Ben as he sat behind his drum kit.  I then saw those of Chris and Daniel and they walked around to the front of the stage.  There was someone else though amongst them, someone familiar, it was Paul Mac!  My four favorite musicians in the world were all in one room!  Simultaneous with the lights on stage and hard-hitting chord progression of "Without You", came a sudden slap-in-the-face and wake-up call that I was somewhere I'd only dreamt of being for so long.  There was something different about the band as I watched them perform…something really good.  They were tighter, louder, and more in control.  Daniel owned the stage and did it with such confidence.  He appeared strong and passionate behind his music.  His stage presence was nicely complimented with his dark trousers, white buttoned shirt, and black tie.  His black headband was a nice touch adding a humorous "commando" element to it all - someone who's battled quite a bit in his life, found some fun along the way, and had a swig or two of Jim Beam to fit the occasion.

With no further ado, Emotion Sickness immediately began after "Without You" and was just as strong and powerful as the song before it.  Paul was amazing to watch.  You could see that he was right where he wanted to be.  He was always smiling and bouncing around cheerfully behind the piano.  You could tell that he loved every note and key – a true Silverchair fan himself.  The chemistry between him and the band was truly unique and incredible.  Even though I feel the band has since musically and emotionally moved on from Neon Ballroom, the song was still played with a lot of emotion as the title suggests.  I could still hear the sadness and pain in Daniel's voice but not one of defeat, just the opposite in fact.

Little words were exchanged in between songs though there were a few highlights: Daniel's three large swigs of Jim Beam, "Happy Birthday" sung to Ben (who's birthday wasn't that night but that's beside the point),  Daniel saying "Please keep making noise so I don't have to come up with more to say" as well as "That stuff's really strong" after the second large swig of Jim Beam.  There were also many smiles and laughs exchanged by all of the band members.    They all looked like they were having a great time.

The second half of the set was a little bit more dance-ish.  "The Door" kicked off and Daniel shook those hips.  It was fun watching Paul shake his off the side of the stage during "Freak" too.  The new songs were amazing and very dance-able as well.  I could hear the influences from both The Dissociatives and Timberlane.  Very nicely done, can't wait for the new album!  The Midnight Oil cover was also a lot of fun to hear and move to as well.  I haven't heard too much of that band but I know I'll be checking more of them out now!

Overall, it was the best performance I've ever seen from any show I've ever been to!  It has been an amazing experience to grow up with Silverchair after all these years and still feel just as moved as when I first heard them.  Now, however, it has so much more meaning and I love being surprised by the new complexity and diversity of each new album.  I was also really moved and touched by Daniel's compliments to his audience.  He thanked us a lot throughout the performance and seemed moved by the fact that EVERYONE in the audience sang loudly and knew the words to EVERY SONG!  I hope Silverchair realize the impact that they have and always will…at least in my eyes and ears. 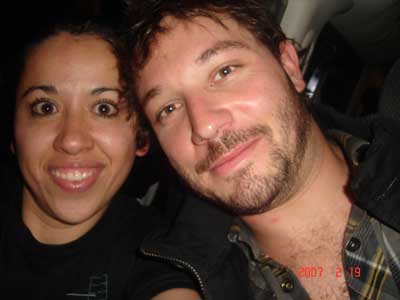 This was my first time watching silverchair live. They totally rocked that night and got the audience really excited. Lever was my favorite song from the night. They also played Emotion Sickness, Ana's Song, Freak, Luv your life, Across the night, Emotion Sickness, The Greatest View, Tuna in the Brine, I don't wanna be the one, Straight Lines, and others. They left for a short intermission and then returned. They played for about two hours. It was awesome. Afterwards, I got to take pictures with Chris.=)

They still rock after all these years!! 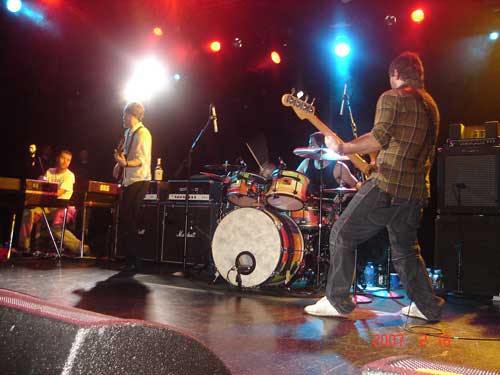 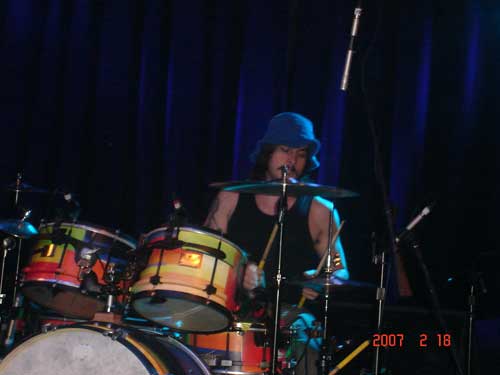 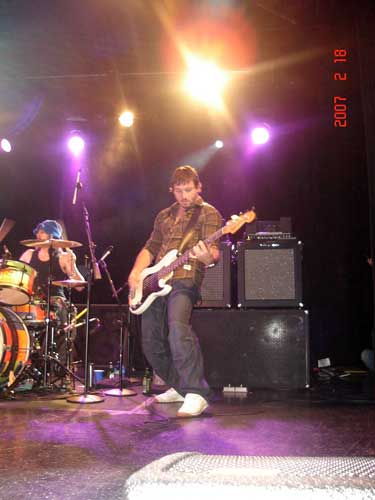