A Big Day Out For Chris 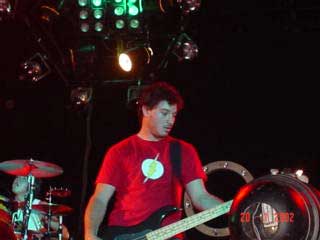 Eight years after making his debut playing bass with Silverchair, Chris Joannou, has spoken onstage for the very first time.

The momentous event happened at the Gold Coast Big Day Out in Australia where Silverchair rocked a sold out crowd of 45,000 people yesterday. Daniel spring the surprise on Chris, asking him to come over to the mic' and say hello.

Chris managed a shy 'how'reyadoin'?' before retreating back to the safety of his bass amp's.

In addition to their new single "The Greatest View" (which is released next week), the band unveiled three other new songs at this show. They played a rockin, revamped version of "One Way Mule", a melodic midtempo number called "World Upon Your Shoulders" and a throbbing newie called "Without You". The setlist was as follows: 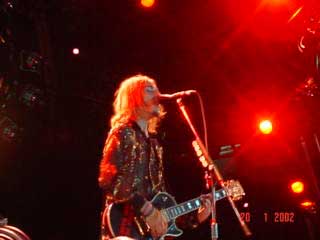 
By Kelly
(Photos by chairpage)

I had been waiting for this moment since November 28 1999, the last live Silverchair show that I had seen; I have to say it was more than worth the wait! As always Daniel had the crowd mesmerised as he launched into Emotion Sickness, in addition to Sam Holloway was keyboardist Julian Hamilton (as mentioned previously on chairpage.com) who simply added that extra element that made the crowd beg for more; after a rocking Emotion Sickness, Daniel unveiled a new song (Without You), the crowd took a little time to react to this newie but the response was; as always; amazing, Brisbane and the Gold Coast had certainly missed Silverchair. 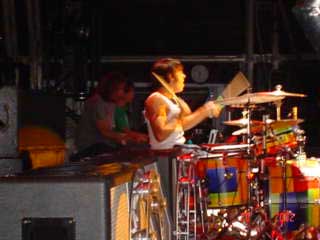 After hearing only the first opening bars of Paint Pastel Princess the crowd again just went wild; Daniel showed very little emotion during these first few songs; he seemed to be heavily involved with the music; Chris as always rocked out on the bass and it didn't take long for Ben to remove his shirt as he literally smashed away on the drums. Israel's Son just about brought the Big Day Out to it's knees; just the sight of at least 30,000 people with there hands and fists thrust in the air was awe inspiring to say the least; Slave, again, just rocked out! The crowd was alive, it was like a massive sea of bodies all jumping in unison, sometimes the crowd seemed to engulf Daniel's voice.

Somewhere in between it all Daniel told the crowd that Chris told him he had always wanted to be a frontman, so Daniel gave him the mike; Chris managed a "how ya doing? and "I'm new at this" before retreating back to the safety of his bass. 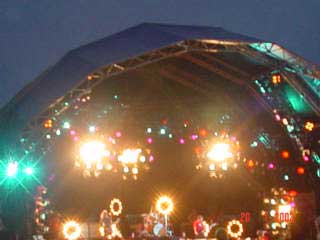 After the heavier songs Daniel told the crowd he was going to play some slower songs, he also told us the be careful and not to hurt anyone (or something to that effect), Miss You Love and Ana's Song followed; Daniel's voice seems to be more polished than ever before as I've never heard these two songs sound so beautiful. Another newie was World Upon Your Shoulders which the crowd accepted with arms wide open; The Greatest View brought an awesome response with the crowd singing loudly all the way through.

Daniel again spoke to the crowd and told us he was going to play a song to make us jump; he did! The Door had the crowd going nuts with excitement; Daniel also made the comment "fuck I'm a good frontman" during it all to which the crowd readily agreed! Anthem for the Year 2000 was a stadium stopper, the crowd were all just so involved at this point; all singing "We are the Youth" at the top of their lungs! Freak just brought the house down; it was a perfect ending to an overwhelmingly outstanding show! The crowd were still screaming for more as Daniel finally left the stage with the guitar feedback still straining out of the speakers; even when the roadies took to the stage to clear up their gear the crowd still wanted more. After two years of absence from the Gold Coast and Brisbane all I can say is hurry back soon Silverchair, you have been missed!

After much excitement, nervousness, disbelief and anticipation, the time finally arrived to make our way down to the blue stage. It was an hour before Silverchair would perform but with the new D-Barrier in place, I thought it was best to get there early to get a good position. After a certain amount of people are in the front stage area, they block it off so no one else is let in for safety reasons, and there was no way I was going to be in a position where I couldn’t see Silverchair perform. I managed to get second back from the barrier to Daniels’ side of the stage and had the ‘Greatest View’. So, after what seemed the longest hour of my life, Silverchair finally graced the stage. 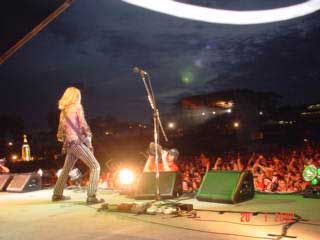 The performance was powerful and energetic. There was such a positive vibe in the whole performance and atmosphere of the crowd that seemed to be felt by all. As I looked around at the crowd, there were many smiling faces. Daniels’ voice is indescribable, and like The Falls Festival in Victoria(2000), he blew me away. The passion in his voice was soul felt. I guess you just have to hear him to understand.

I was really impressed by the new D-barrier. I had prepared myself to be crushed and bruised but it was the most crowd friendly Silverchair gig I’ve ever been to thanks to the separating barrier. Unless I was just really lucky, I wasn’t too bothered by the weight of the crowd at all.

As usual, between songs, Daniel amused me and I’m sure many others with his ramble about getting sleep stuck in his eye and his sarcasm about how after he pashed Chris last night, Chris confessed he wants to be a ‘front man’ of a band. Which, by the shy grin on his face and the hesitancy to talk into the microphone, was obviously the first Chris had heard of it... What can I say…Silverchair were brilliant! I was mesmerized by the entire performance. I walked away feeling unbelievably content and overwhelmed but also wanting just that little bit more (I’m so greedy! I can’t get enough). From what I hear with some of the new songs, Diorama is really going to be worth the wait. The boys never fail to please!